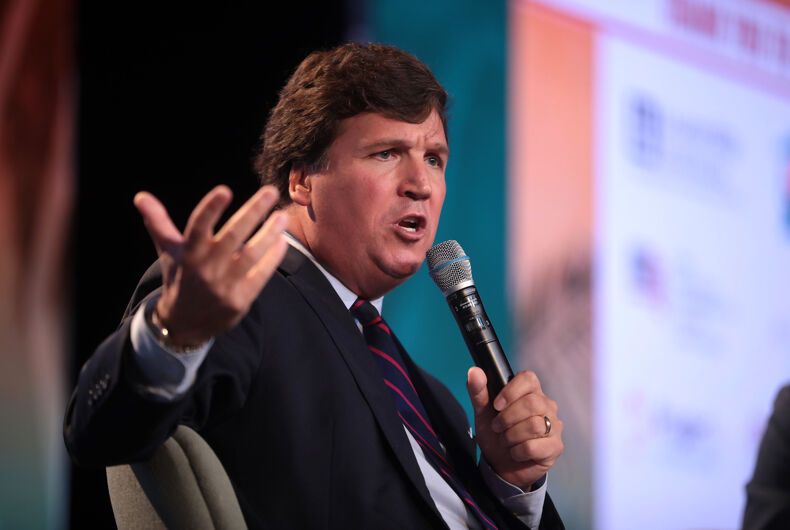 As funeral preparations are underway for the late presidential candidate, Carlson is upset that organizers have excluded a man who helped to plan the Stop The Steal rally that led to an insurrectionist attack on the Capitol. And he blames McConnell.

Tim Unes, an event planner who formerly worked for Dole, had volunteered to help organize the funeral, but Dole’s family has cut ties after learning of his involvement in the attack on democracy.

In paperwork in the possession of the congressional select committee investigating the assault on the Capitol building by Trump supporters in an attempt to subvert the results of the presidential election, Unes is listed as a “stage manager.”

McConnell’s staffers were concerned about his inclusion and reached out to the family to let them know about his role in the insurrection. The family chose to uninvite Unes.

“McConnell knew that Tim Unes had helped organize Donald Trump’s political rally in Washington this January. There was nothing illegal or immoral about that. If anything it’s a constitutionally protected behavior, it is organizing a political rally. It is why we have the Bill of Rights,” Carlson said on his show Thursday night.

“But the partisan lunatics on the January 6th committee don’t acknowledge the Bill of Rights and they objected to this and Mitch McConnell aggressively took their side as he has from the very beginning. So, McConnell then convinced the Dole family to cancel Tim Unes’ contract and disinvite him from the funeral.”

“Then McConnell made sure the story made the New York Times and when he did that he knew perfectly well that a piece like this would completely destroy Tim Unes’ life, which unfortunately it definitely will,” he continued. “Even by Mitch McConnell’s usual standards of viciousness, and he is known as the nastiest old woman in town, this was an incredibly cruel thing to do.”

Earlier this week, Carlson claimed that COVID-19 feminizes people and that “no one ever says that” except for brave truth-tellers like him. He said it takes away their “life force” which is as close as he’s come to acknowledging the reality of the pandemic: the virus can kill you.

Technically, Mitch McConnell is the Republican leader in the United States Senate.

But in real life, on the issues that matter, Mitch McConnell is an instrument of the left. pic.twitter.com/EUw8H3OUBT