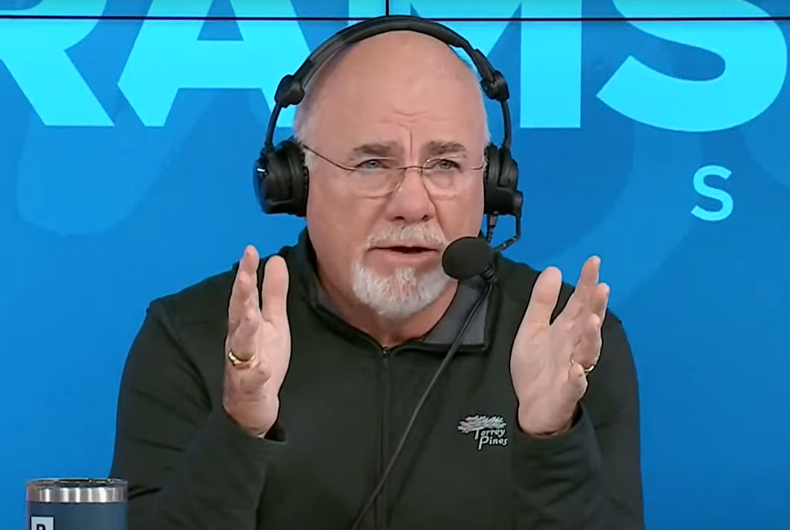 Evangelical finance guru Dave Ramsey’s company is getting sued by a former employee who alleges that he was fired because he wanted to follow science-based precautions to keep from getting COVID-19 instead of just relying solely on prayer. Ramsey has previously said that anyone who follows such precautions like wearing masks and social distancing is a “wuss.”

The radio host, former Fox Business host, and New York Times best-selling author of The Total Money Makeover and his company, Ramsey Solutions, has faced multiple lawsuits in recent years because of its allegedly “cult-like” atmosphere.

One woman, a former customer services employee named Julie Ann Stamps, sued the company this past September because she alleges she was forced to resign when she came out as gay. Ramsey Solutions, she said, “imposes a mandatory biblically based code of conduct on its employees.”

Now a former video editor, Brad Amos, is suing Ramsey. Amos said in the suit that he had to undergo three days of “indoctrinating employees to constantly praise Dave Ramsey” when he started working for the company in 2019. He had to regularly share information with his employers about “deeply personal moments” from his marriage, and that information was not kept private.

It’s in that atmosphere that Ramsey’s strong opposition to COVID restrictions allegedly led to putting employees’ lives in danger. Ramsey Solutions held a 900-person meeting just a day after the first employee tested positive for COVID.

Ramsey, the lawsuit states, told employees that coronavirus protections were for people with a “weakness of spirit” and to pray instead.

Amos was worried about getting the virus because he has a child with Coats’ disease and his wife is “high-risk.” He said that his sincerely held beliefs about protecting his family’s health were not respected at the company.

Amos said that he talked to his boss about working remotely on a documentary and that he was demoted from a senior video editor to an assistant editor as a result.

His boss later called and told him he missed a deadline, forcing him to undergo another round of training in the “Ramsey Way.” That deadline was used as the official reason for his demotion. He was fired later after months of one-on-one meetings because he was not “humble,” the lawsuit said.

Religious News Service reported earlier this year on Ramsey’s anti-health stances. Someone at the company filed a complaint with the Occupational Safety and Health Administration (OSHA) in May 2020, accusing Ramsey Solutions of not doing enough to prevent the spread of coronavirus.

“So whoever you are, you moron, you did absolutely no good, except piss me off,” Ramsey told staff at a meeting at the time, according to an unnamed source. “You are not welcome here if you are willing to do stuff like that. If you are really scared and you really think that leadership is trying to kill you…. Please, we love you. Just leave. We really don’t want you here.”

In 2020, Ramsey Solutions hosted a “Boots & BBQ” Christmas party for around 800 employees at their Tennessee office, well before most people had been vaccinated and just after a major outbreak in the state. The invitation for the party didn’t even mention masks.

Ramsey, on his radio show, had already been railing against “totalitarian” mask mandates and said that he was on “a crusade” against them.

“We know that many of you have felt pressure from family and friends, some of whom think you are ‘weird’ for still going in to work,” a November 2020 employee newsletter said. “Fortunately we work in a place that is used to being called weird…. Now we are weird for following common sense and using logic in providing for our families and our customers.”

Earlier in 2020, Ramsey railed against the media on his radio show, claiming that reporters were exaggerating how bad the pandemic would be.

“You would think that the black plague was coming through the U.S., listening to people whine,” he said, saying that the virus only affects people who are weak or already sick. “You guys have lost your mind out there.”

He said that people should carry on as usual and refused to refund people who had already paid for events he offered.

“We have people calling in, they are wanting to cancel stuff for a live event in May — let me tell you how much of your money I am going to give you back if you don’t come for the coronavirus in May,” Ramsey said. “Zero! I am keeping your money. You are a wuss.”

Stamps, the former employee who says she was fired for coming out as a lesbian, said in her suit that supervisors told her to pray when she came out. She said that her supervisor told that the company’s belief was that “homosexuality is inconsistent with her faith or a sin.”

She was then told to give her two weeks notice and an exit interview was scheduled for her because “Ramsey did not agree ‘with that lifestyle.'” She said that she agreed to leave in June 2020, but felt forced out.

Stamps is suing the company for anti-gay discrimination and religious discrimination. She argues that her deeply held religious beliefs as a Christian require “living a whole and honest life.”

“It is not man’s nor the church’s place, and certainly not her employer’s place, to judge her personal relationship with God,” her lawsuit states.

Ramsey Solutions, in a statement, says that Stamps left the company “voluntarily and on good terms” and that after she left she “falsely accused her former supervisor and friend of discrimination.”

In another case, Ramsey is suing a Marriott resort in Orlando for requiring masks and other COVID restrictions. Ramsey Solutions says the COVID restrictions forced it to move a conference it was holding at that Marriott, a last-minute change that allegedly cost the company over $11 million. Marriott says that it was Ramsey Solutions that canceled its contract and it still owes the hotel $658,600 under its cancellation policy.

Ramsey Solutions denied the allegations in Amos’s lawsuit, calling them “blatantly false.” A spokesperson said that the company is considering a countersuit against him for his “inflammatory and false statements.”

“It appears the goal of this lawsuit is to smear Ramsey Solutions’ reputation and extort a large settlement, and we are fully prepared to defend this lawsuit and prevail,” the spokesperson told The Tennesseean.