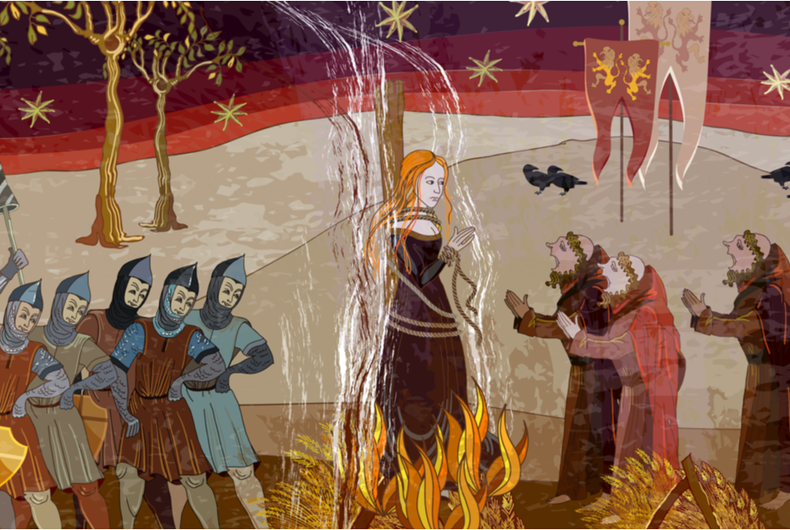 French hero Joan of Arc is burned at the stake by Catholic priestsPhoto: Shutterstock

Each time I learn about the Catholic Church’s latest oppressive actions against members of transgender communities, I cannot help thinking about something Frederick Douglass, who escaped enslavement and worked for the cause of liberation, once said when he described the dehumanizing effects of slavery not only on those enslaved alone, but also on white slavers whose position to slavery corrupted their humanity.

While the social conditions of Douglass’s time were very different from today, nonetheless, I believe Douglass’s words hold meaning by analogy: “No man can put a chain about the ankle of another man without at last finding the other end fastened about his own neck.”

Though oppression serves the interests of dominant group members, eventually it will backfire, and the chain will take hold of them.

While the Catholic Church vehemently spoke out against gender non-conformity and same-sex sexuality, their own policies boomeranged and hit them in their own faces in the not-so-distant past.

Used primarily to silence any potential resistance from the Church, the Nazis conducted their so-called “Cloister Trials” in which they dissolved Catholic youth fraternities, arrested and incarcerated large numbers of priests, religious brothers, and Catholic laity in prisons and concentration camps accusing them of being “threats to the state” on fabricated charges of homosexuality and gender non-conformity.

In our times, the Catholic diocese in Marquette, Michigan has instructed priests to refuse baptism and communion to transgender and non-binary people unless they “repent.”

“Repent” to the diocese represents a complete denial of the individuals’ essential identities and of their personal integrity. To be accepted into the flock, they must deny their humanity, though the diocese’s announcing order frames the “instruction” in the form of some sort of loving intention:

“It is important to know that a covenant relationship is one that is made in love. It is a voluntary and mutual pledge to grow together in relationship. A covenant, since it represents a loving relationship, allows members room to grow in generosity and mutual support.”

But this “love” amounts to nothing less than the Catholic Church’s long-standing conspiratorial harassment and intimidation toward trans people.

Catholic priests, wearing flowing floor-length gowns and a not-so-in-vogue bonnet as they swing their flaming scented purses throughout their cathedrals of brightly-colored window glass followed by little boys similarly attired refused the first communion to a 9-year-old girl in 2017 – because she wished to wear a suit.

“She has a love for suits and wears them often,” wrote Chris Mansell, the young girl, Cady’s mother. “Since there wasn’t initially a dress code given for the event, we assumed she could wear a suit. We went all out and made a weekend out of finding her the perfect outfit…one that makes her feel beautiful and confident.”

Rather than buckling to Church pressure, Cady chose instead to skip the communion, and her mother pulled her from her Catholic school. A triple-snap to Cady and Chris!

In related news, the Vatican hierarchy fenced off Alex Salinas, a 21-year-old transman from Cadiz, Spain, by informing him that it had denied his request to become the godparent of his nephew because being transgender is incongruent with Catholic teaching.

According to the Church’s Congregation for the Doctrine of the Faith, its doctrine-enforcing agency, being transgender “reveals in a public way an attitude opposite to the moral imperative of solving the problem of sexual identity according to the truth of one’s own sexuality. Therefore, it is evident that this person does not possess the requirement of leading a life according to the faith and in the position of godfather and is, therefore, unable to be admitted to the position of godfather or godmother.”

Long prior to this statement, Joan of Arc, the teenager who helped defeat the English in her native France, became one of the greatest war heroes in French history. Despite this, the Roman Catholic Church tried and convicted Joan on the charge of heresy in rejecting Church authority in preference for direct inspiration from God, but most importantly, by donning men’s clothing. Joan died by burning at the stake at the hands of the Church.

Pope Francis, the so-called “progressive” Pope, further trashed trans people in a speech to the Pontifical Academy for Life’s general assembly in which he labeled gender confirmation procedures as “manipulation” and a “choice.”

“The biological and psychical manipulation of sexual difference, which biomedical technology allows us to perceive as completely available to free choice — which it is not! — thus risks dismantling the source of energy that nurtures the alliance between man and woman and which renders it creative and fruitful.”

In an April 2016 letter focusing on marriage and the family titled Amoris Laetitia (“The Joy of Love”), Pope Francis sternly warned against gender confirmation biomedical procedures when he stressed that “conditioning children into believing a lifetime of chemical and surgical impersonation of the opposite sex is normal and healthful is child abuse.”

Later, in a meeting with Bishops during his pilgrimage to Poland in July 2016, Francis talked about current times in which, “we are living a moment of annihilation of man as image of God.” Francis referenced Pope Benedict XVI, his still-living predecessor, who branded these times as “the epoch of sin against God the Creator.”

Frances took this occasion to inflict another tirade against trans people when he warned, “Today, in schools they are teaching this to children – to children! – that everyone can choose their gender.”

He condemned this on what he cited as “ideological colonizing” backed by “very influential countries,” which he did not name. One such “colonization,” he said – “I’ll say it clearly with its first and last name – is gender.”

A key factor in the development of orthodox Catholic ethics since the 13th century is the concept of “Natural Law,” which includes a set of standards the Church has inferred follow an ordering of nature.

“Basing itself upon Sacred Scripture, which presents homosexual acts as acts of grave depravity, tradition has always declared that homosexual acts are intrinsically disordered. They are contrary to natural law. They close the sexual act to the gift of love [i.e., children]. They do not proceed from a genuine affective and sexual complementarity. Under no circumstances can they be approved.”

Dominican Brother Nicanor Pier Giorgio Austriaco, in his book The Myth of the Gay Gene, elaborates on this theme.

“The Church teaches that as embodied spiritual creatures, human beings were created male and female so that in the complementarity of the sexes, they can reflect the inner unity of the Creator. This was recognized and confirmed by the Lord Jesus who instituted the sacrament of marriage to celebrate the divine plan of the loving and life-giving union of men and women.”

This is the same denomination that convicted physicist and astronomer Galileo Galilei on the charge of heresy by insisting that the Earth revolves around the Sun, rather than, as per Church teaching, the Earth was the immovable center of the universe with the Sun revolving around the Earth.

The Church forced Galileo to spend the remainder of his life into the 16th century under house arrest. It took the Church under Pope Paul II approximately 350 years to finally admit they got it wrong.

The Vatican’s Pontifical Gregorian University co-sponsored a conference in Rome, the Child Dignity in the Digital World Congress, on the issue of keeping children safe online and protecting them from sexual abuse and exploitation. Pope Francis attended the forum, and he endorsed the 13-point resolution, the Declaration of Rome, that the technology, child safety, health, and theological experts agreed upon at the gathering for keeping children safe online.

Well, since all of Pope Francis’s lambasts against trans identities and same-sex sexuality go out over the internet and onto social media platforms, under any definition of the term, Pope Francis himself falls under the category of a cyberbully. I brand this as “Orthodox Theological Hypocrisy!”

Pope Francis, in his relatively short time serving as the leader of the Roman Catholic Church, has talked about inclusion and acceptance of diversity, at least in his words.

Many Church watchers had hoped that Francis would have taken the Church out of the 17th Century where it has remained stuck for some time and carry it on the wings of a dove to at least the 19th if not the 20th or 21st century regarding its oppressive precepts and “instructions” on LGBTQ people.

But alas, the dove has died as has the hope. Francis’s policies on topics of trans identities and same-sex sexuality have remained unchanged. Even more troubling, the Pope has further tightened Church restrictions on trans identities.

When religious leaders preach their damaging interpretations of their sacred texts on issues of same-sex relationships or identities and gender non-conformity within and outside their respective houses of worship, they must be held accountable and responsible for aiding and abetting those who target and harass, physically assault, and murder people perceived as LGBTQ.

Nearly every two or three days, a person is killed somewhere in the world for expressing gender nonconformity. Most of these murders are of trans women of color.

Will it take another 350 years for the Catholic Church to finally admit they got it wrong?