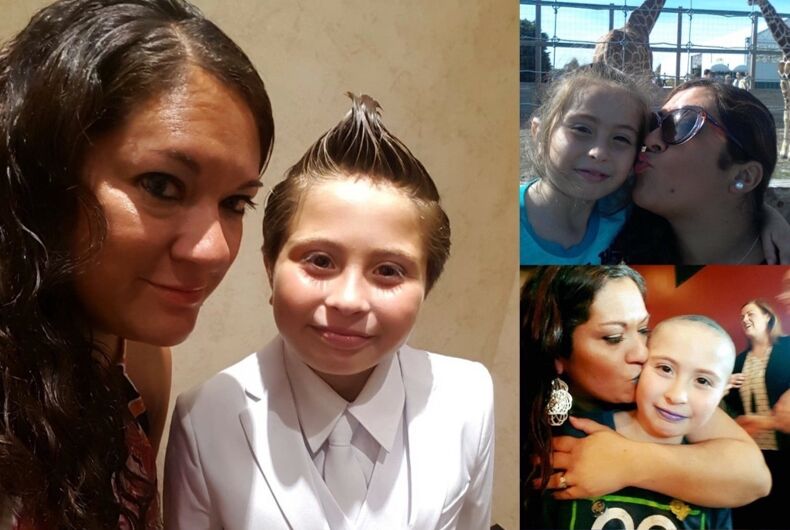 Nine-year-old Cady was thrilled to be receiving her first communion at her local Catholic church in Indiana. She and her mother, Chris Mansell, went out shopping to buy a very special suit for Cady to wear on her big day.

“She has a love for suits and wears them often,” Mansell wrote on Facebook. “Since there wasn’t initially a dress code given for the event, we assumed she could wear a suit. We went all out and made a weekend out of finding her the perfect outfit… one that makes her feel beautiful and confident.”

But when news hit the local parish that Cady was going to wear a suit instead of “feminine” attire, the family was told the church wouldn’t allow a girl in a suit to get communion from a man in a smock. They changed the school’s dress code to specifically ban girls from wearing suits.

In a later update the post, Mansell explained that Cady didn’t attend the communion and had been removed from the school altogether.

“First Communion was held on 10/1. We did not attend,” Mansell wrote. “We left the church/school immediately on 9/28 after the priest said if Cady showed up to the ceremony in a suit she would not be given communion and we would be forced to leave the church.”

But in an interesting twist, several girls were allowed to receive communion even though they broke the school’s dress code.

“The dress code states NO sleeveless dress are allowed, shoulders must be covered. But almost all the girls wore sleeveless dresses,” Mansell said. “MY daughter was the only girl excluded for violating the dress code. And we knew this would happen.”

“This is why I chose not to give in. It was a total double standard.”

This story from Pantsuit Nation member Chris Mansell has us equally enamored (that pantsuit!) and outraged because of…

This woman beat & starved her girlfriend. The judge gave her what she deserves.