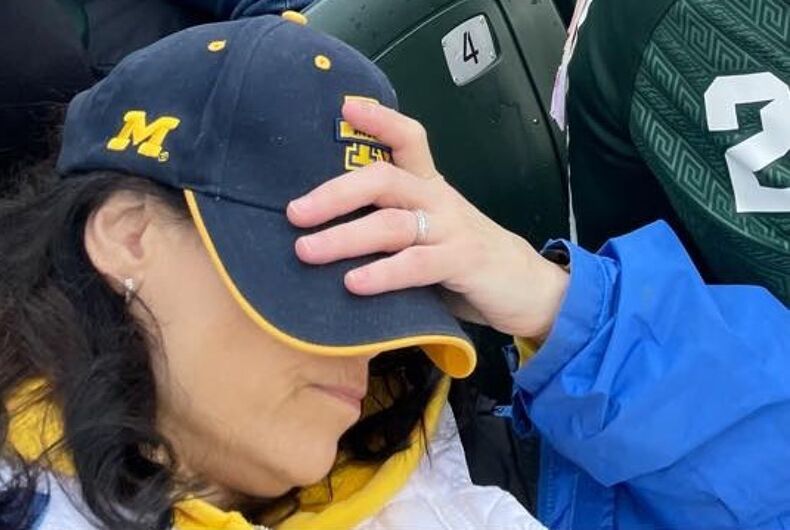 Out Michigan Attorney General Dana Nessel has offered up a mea culpa on Facebook that’s making waves for its refreshing honesty and quirky humor.

She has apologized for getting drunk at a tailgate party despite her staff’s insistence she hire a PR firm to handle the mini-scandal – and her constituents seem impressed.

Related: New study shows why there are so few LGBTQ anti-vaxxers

“Before the big game, I attended a tailgate on an empty stomach,” she wrote. “Much to my surprise, MSU tailgate’s tend to have more alcohol than food, so I thought it seemed like a good idea to eat 2 Bloody Mary’s, since as long as you put enough vegetables in them, it’s practically a salad. As it turned out, this was not a brilliant idea. Also, I might be a terrible bartender.”

“I proceeded to go to the game (which I’m told Michigan definitely won!) and started to feel ill. I laid low for a while, but my friends recommended that I leave so as to prevent me from vomiting on any of my constituents (polling consistently shows ‘Roman showers’ to be unpopular among most demographics).”

“I had a few folks help me up the stairs and someone grabbed a wheelchair so as to prevent me from stumbling in the parking lot,” she continued. “Like all smart people attending festivities where drinking occurs, I had a designated driver. I went home, fell asleep on the couch, and my wife threw some blankets on me and provided me with some water and Tylenol for what she knew would be a skull-crushing hangover the next day. (Best wife ever!)”

She included a non-flattering photo of herself slumped over in her seat during the game “just so one doesn’t have to imagine what this scene might have looked like.”

“I am human. Sometimes I screw up. This was definitely one of those times,” she continued. “My apologies to the entire state of Michigan for this mishap, but especially that Michigan fan sitting behind me. Some things you can’t un-see.

She goes on to “pledge never to drink on an empty stomach, and definitely never to have another Bloody Mary,” saying, “it’s gonna take a while to get that taste out of my mouth.”

Earlier this year, Nessel made waves in the queer community when she announced that she would not accept any donations from the Human Rights Campaign until President Alphonso David resigns or is fired. David allegedly leaked confidential information about a woman who accused Andrew Cuomo, the former governor of New York, of sexual harassment and assault in order to discredit her.