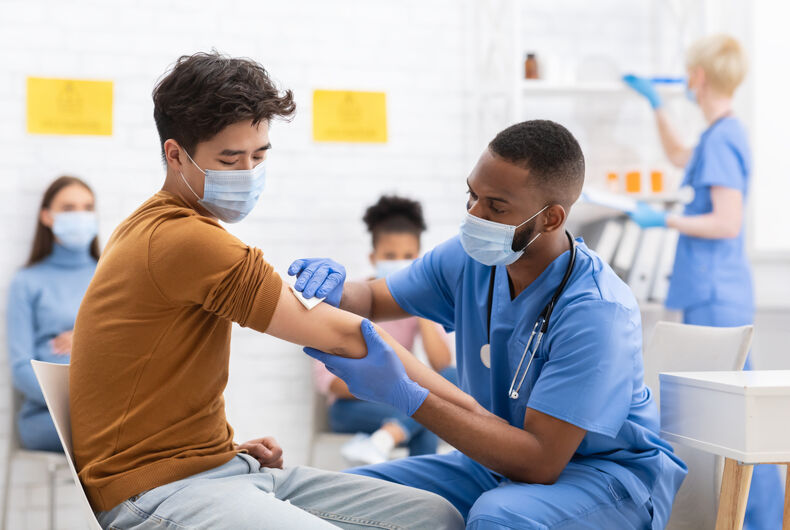 LGBTQ people are doing much better than cisgender, heterosexual people when it comes to getting vaccinated.

New survey data from the Human Rights Campaign (HRC) says that 91% of LGBTQ adults are fully vaccinated in a poll that was conducted this past July. That’s 20 percentage points higher than the general population’s vaccination rate today; 70% of U.S. adults are fully vaccinated against COVID-19 today. Another 3% of LGBTQ people in the study said that they had gotten at least one dose of a COVID-19 vaccine.

The results varied somewhat by race, but at least 85% of every racial identity of LGBTQ people that HRC surveyed reported being fully vaccinated, far ahead of their cishet counterparts. The rates of vaccination didn’t vary much by gender.

These results varied greatly by gender; 68% of LGBTQ men said that they had a lot of confidence in the vaccines, compared to 54% of non-binary adults and 58% of LGBTQ women. Confidence also varied by race, with Black LGBTQ adults the least likely to express a great deal of confidence in the vaccines (52%). Overall, though, LGBTQ people of all races and genders are more confident in science than the U.S. public in general.

Another reason that LGBTQ people might be getting vaccinated more is that LGBTQ people are more likely to report having gotten COVID-19, which could mean that they’re also more likely to know someone who has gotten it. 21% of LGBTQ adults said that they had either tested positive or were “pretty sure” that they’ve had it, compared to 14% of U.S. adults in general. Race and gender didn’t affect this result much for LGBTQ adults.

The survey didn’t ask about media consumption or political affiliation, but those factors could have reduced vaccine refusal rates among LGBTQ people. LGBTQ people tend to be politically to the left of the general population, and vaccine refusal cuts along party lines with Republicans much more likely to say they will never get vaccinated compared to Democrats.

This also means that LGBTQ people are less likely to consume right-wing media, and conservative media sources like Fox News and Newsmax have been broadcasting anti-vaccine ideology.

Those same media outlets tend to have less-than-positive coverage of LGBTQ issues, so in a way, that longstanding bias may have inoculated many LGBTQ people to anti-vaccine rhetoric.

The Tegan and Sara Foundation conducted a poll in April that also showed the LGBTQ community’s impressive vaccination rate. Two out of three LGBTQ Americans said that they had received at least one dose of a vaccine at that point, which was earlier in the vaccine rollout process than the HRC survey. 84% of the remaining third said that they were going to get vaccinated “as soon as possible.”

The HRC survey involved 1500 LGBTQ adults and was conducted by Community Marketing & Insights.