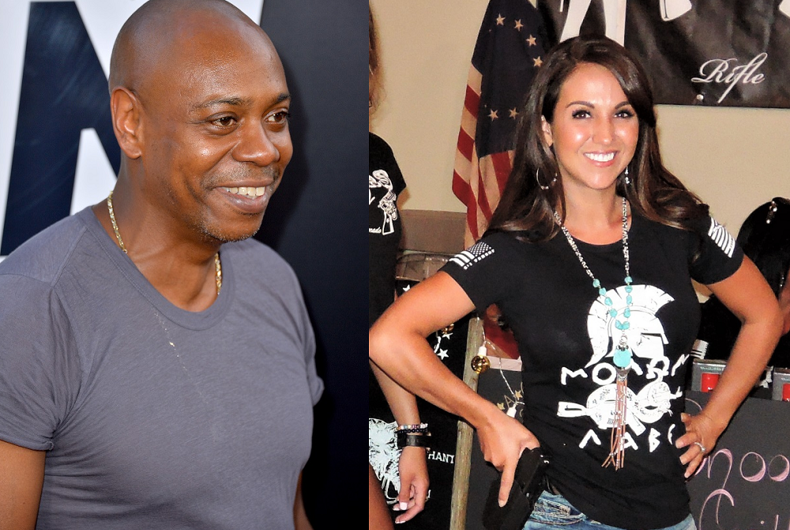 Rep. Lauren Boebert (R-CO) showed her support for comedian and self-described TERF (trans exclusionary radical feminist) Dave Chappelle, who has come under fire for anti-transgender comments, in a short message.

“Boss,” she wrote in a tweet, linking a story about how Chappelle saying, “Man, I love being canceled.”

Chappelle told 19,000 people at a performance in San Francisco that it’s a “huge relief” to be canceled.

“It’s like getting Capone on tax evasion,” he said.

His defiance against transgender people and LGBTQ activists captured the attention of the far right, and Brietbart News wrote a glowing article about it. Boebert called him a “boss” to show how much respect she had for the comedian after he was “canceled.”

The only problem is that he has not been canceled. He was still able to sell out nearly 20,000 seats at that performance, giving him a bigger audience than the vast majority of transgender people who he insulted.

Chappelle said that he’s a TERF in his latest Netflix comedy special last month, The Closer. He made derogatory comments about transgender women’s genitalia. He also joked about beating up gay men and lesbians.

Netflix refused to remove his show and, other than some online criticism, Chappelle hasn’t suffered any material consequences for his anti-LGBTQ remarks.

Instead, Chappelle has spun them to further his career, painting himself as the victim of what he calls “LBGTQ, LMNOPQXYZ people” and building up his audience on the right.

Boebert herself has faced criticism for her anti-LGBTQ comments in the past. She led a press conference outside the Capitol when Congress was voting on the Equality Act, where she went on an unhinged rant full of fake claims about transgender pre-teens and told reporters she is raising her sons “to be men” and she is “proud of that.”

And last week she attacked out Transportation Secretary Pete Buttigieg for taking “maternity leave” to take care of his new kids.

“The guy was not working! Because why? He was trying to figure out how to chestfeed,” she said.