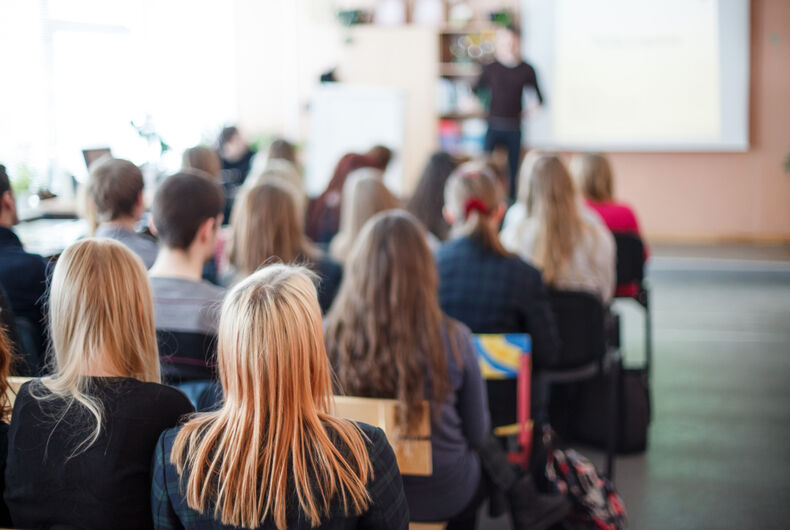 A Visalia, California school board member has resigned after making “humiliating, upsetting, and frustrating” comments about “sexual relations” to a gay teacher at Golden West High School.

Christopher Pope announced his resignation on Tuesday, just ahead of the board’s plan to censure him, according to the Vasalia Times Delta. He also apologized to the teacher he insulted, who was present at the meeting.

“I want to publicly apologize that I have hurt this individual,” he said. “That is not my character. It is time for the board to return to the business, it is what’s best for our kids.”

The board unanimously accepted Pope’s resignation.

The incident in question occurred when the teacher, Ben Cummings, asked the school board to officially recognize Pride Month. He and Pope met to discuss the proposal, and according to Cummings, Pope reacted negatively.

“Mr. Pope made comments about my sexuality that were humiliating, upsetting, and frustrating,” Cummings said.

“At one point, Mr. Pope slammed his hands down on the table and said, ‘Don’t make me be homophobic, Ben.’… As many times as I tried to divert the conversation from sexual relations, Mr. Pope continually brought it up and made it clear it was something to be ashamed of.”

In the wake of his resignation, Cummings expressed hope that the moment is an opportunity for Pope to learn from his mistakes and recognize that his actions were “hurtful and inappropriate.”

“I don’t believe he is a bad person,” Cummings said, “but I also think that you can’t double down on your bad behaviors without facing the consequences.”

Board President Juan Guerrero added that he hopes the board will soon honor Cummings’s request and pass a proclamation recognizing Pride Month. He said it didn’t take place this past June because they were still working on the wording.

Guerrero emphasized that the board “does not condone Mr. Pope’s action” and called his behavior “inappropriate and outside the scope of his authority as an individual board member.”

Cummings is also working with the board in attempt to create a task force focused on supporting LGBTQ people.