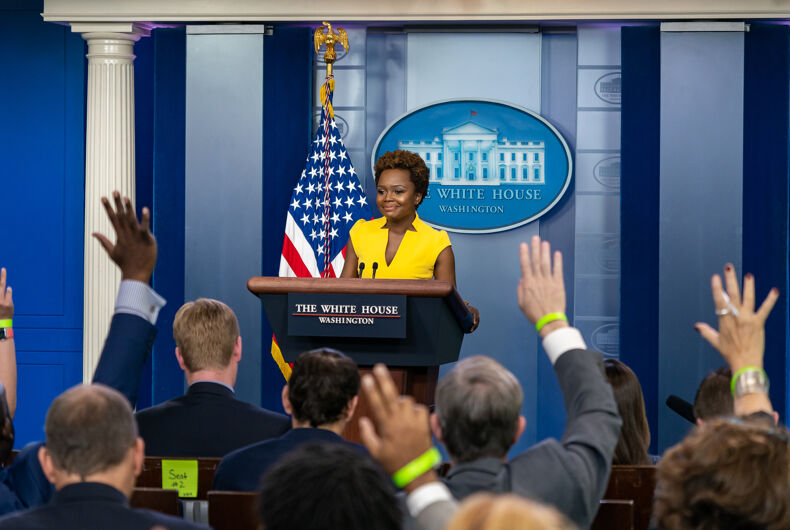 Out Principal Deputy Press Secretary Karine Jean-Pierre called out Republicans “lying” about critical race theory in order to make it into a campaign issue so they could pretend to be the party saving children… while they refused to vote for funding to keep schools open during the COVID-19 pandemic.

Earlier this week, Republican Glenn Youngkin won the election to become governor of Virginia after he made critical race theory a central part of his campaign. He promised to stop it from being taught in schools, which is not something that’s happening, claiming that learning about structural racism in the U.S. hurts kids’ feelings.

A journalist asked Jean-Pierre about it.

“To what degree do you think race was a driving issue in Virginia and around the country, given Republicans were repeatedly focusing on critical race theory?” a reporter asked at the White House Press Briefing yesterday. Jean-Pierre was filling in for White House Press Secretary Jen Psaki.

“Great countries are honest,” she said. “They have to be honest with themselves about history, which is the good and the bad.” She added that school curriculum shouldn’t be set by politicians.

Then she talked about how Republicans are using the issue “cynically.”

“Republicans are lying,” Jean-Pierre noted. “They’re not being honest. They’re not being truthful about where we stand and they’re cynically trying to use our kids as a political football.”

She pointed out that the same people who claim they’re saving children from the scourge of critical race theory also oppose funding public schools so that they can stay open to educate children.

The American Rescue Plan as a large spending bill passed in March that provided funding during the COVID-19 pandemic for a number of local and state services that were facing budget shortfalls, as well as economic stimulus. The law gave $130 billion for grade schools and $40 billion for colleges and universities so that they could stay open even as state and local tax revenues dropped during the pandemic.

Every single Congressional Republican voted against it.

“We know how important it is to make sure that our kids have in-person learning for their mental well-being and also so that they can actually learn,” Jean-Pierre said. “And so that is something that the Republicans refuse — absolutely refuse to vote for.”

“So we got to be honest here, and they’re not being honest. They’re being incredibly dishonest.”

KJP: Republicans are lying. They’re not being honest. They’re not being truthful about where we stand and they’re cynically trying to use our kids as a political football. They’re talking about our kids when it’s election season but they won’t vote for them when it matters… pic.twitter.com/UbtnWH83Zq

Critical race theory is a school of legal thought based on, among other things, the idea that racism is a structural problem – not just a question of individual attitudes – and that even supposedly race-neutral laws can support structural racism.

Fear-mongering on this issue – as well as equal treatment of transgender students and masking policies – has led to conservatives protesting school boards in districts where they believe critical race theory is being taught and has even led to violence and threats of violence.

Last month, the National School Boards Association asked for federal assistance in dealing with threats of violence against school boards.

Teen sues Tennessee over trans sports ban. He just wanted to play on the golf team.