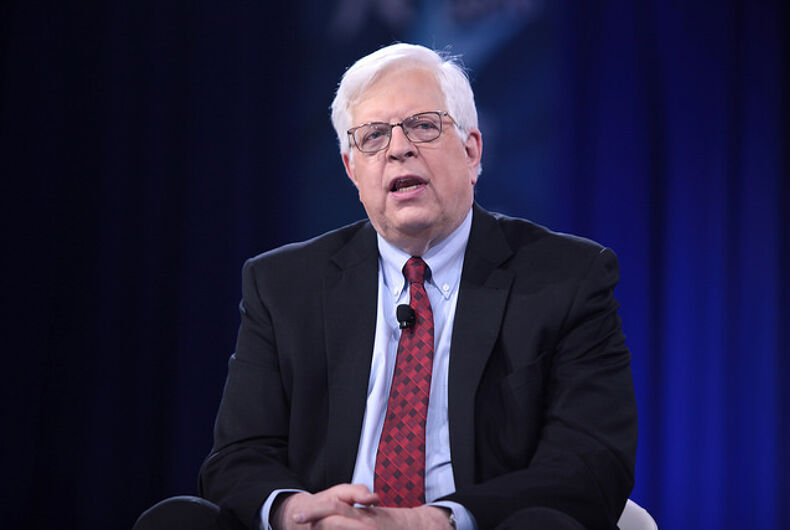 Conservative writer and radio host Dennis Prager said that gay men never experienced being treated like “pariahs” during the AIDS crisis the way that people who aren’t vaccinated against COVID-19 are right now. Liberals and LGBTQ people pointed out on Twitter why he wasn’t showing a good understanding of history.

“During the AIDS crisis, can you imagine if gay men and intravenous drug users – who were the vast majority of people with AIDS – had they been pariahs the way the non-vaccinated are?” Prager asked during an appearance on Newsmax.

Prager is the host of the rightwing radio show The Dennis Prager Show and is perhaps best known for co-founding PragerU, a non-profit organization that makes videos to “educate” conservatives on various topics. PragerU is not an academic institution and Prager himself does not possess any graduate degrees.

On Twitter, people gave their time to educate Prager and others about this history of HIV and AIDS in the U.S., about the enormous stigma that people living with HIV faced in the 1980s and 1990s that went far beyond being asked to get a free shot or get tested to help prevent the spread of a deadly, airborne virus.

I remember being a closeted queer kid in the mid-90s in Central Texas and hearing adults say out loud that AIDS and HIV are a God-motivated plague to punish and eradicate homosexuality.

"For more than 20 years, people living with HIV or AIDS needed look no further than the United States' front door for a reminder of the stigma associated with their disease." https://t.co/WTaH3s0sIs pic.twitter.com/XxQj6qhOxu

Every day, every single mayhem-besotted day, anti-v*xx*rs try my patience. I STRIVE not to give them the attention they crave BUT Y’ALL GOT ME FUCKED UP IN THE GAME IF YOU THINK I’M JUST GONNA LET THESE INFECTIOUS TROLLOPS TRY TO WEAPONIZE THE DEVASTATION OF HIV/AIDS. NO. NO. NO.

Others pointed out that it was conservatives like Prager – and sometimes Prager himself – who were behind making gay men pariahs during the AIDS crisis.

I’m old enough to remember Prager’s friends calling for people with AIDS to be sent to an island to die. https://t.co/hJUFbPbGv3

Rush Limbaugh had a a regular "AIDS Update" segment that mocked the deaths of gay people. https://t.co/1ErUJQVelr

Let us not forget that Mike Huckabee advocated that folks with AIDS be held in state custody and isolated from the general public in 1992 and argued to impose the death penalty on anyone who transmitted HIV. Imagine if gay were pariahs during the early years of AIDS crisis? Yeah. pic.twitter.com/5oOE1twdWV

Dennis Prager, 2008 — complaining that some people were trying to "de-stigmatize AIDS as primarily a gay man's disease"https://t.co/RNNdugM340 pic.twitter.com/WGe72EkiQT

Others pointed out that people refusing all of the COVID-19 vaccines are only “pariahs” because they are refusing potentially life-saving medical treatment, whereas the pariah-dom of people with AIDS in the 1980s and 1990s led to a denial of medical care and dignity.

AIDS patients died because people feared simply touching them would lead to infection. Families abandoned their own children to be buried in unmarked graves. Let us know where we can send the books Dennis, God forbid you read one. https://t.co/RhcliOBFze

aids victims were often deprived basic human decency. their families disowned them. society shunned them. their bodies were deemed hazardous waste. they were my friends. i loved them. dennis prager needs to keep the memory of their tortured souls out of his fucking garbage mouth.

In 1996, Prager testified in Congress that “the acceptance of homosexuality as the equal of heterosexual marital love signifies the decline of Western civilization” in support of the Defense of Marriage Act, which banned marriage equality at the federal level.

He said that gay people should be treated as second-class citizens because “human nature is largely bisexual” but favoring heterosexuals makes people marry a person of the opposite sex.

“It is a sad day when you’re called a hatemonger if you think men and women should marry and that should be the standard,” Prager told Congress.

Congress is not currently debating laws to prevent anti-vaxxers from having children out of fear that they’ll reproduce.