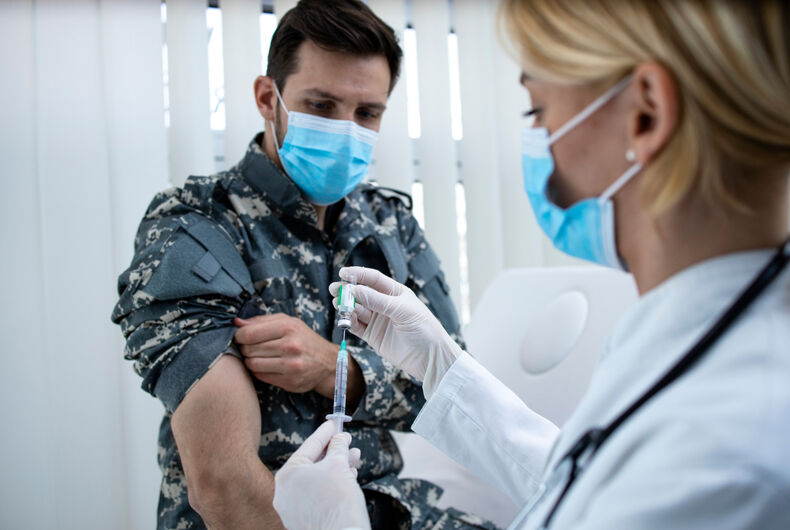 A conservative Christian organization is complaining that members of the U.S. military who refuse to get vaccinated against COVID-19 are being treated worse than transgender people in the military were under Donald Trump’s transgender military ban.

Berry was commenting on his belief that the Pentagon is not examining every request for a religious exemption to the military’s vaccination requirements on a case-by-case basis.

Breitbart News obtained copies of several letters that servicemembers received, telling them that their requests for religious exemptions to the vaccine had been denied. The letters were exactly the same, which conservatives say is proof that the military doesn’t care about “unvaccinated Americans.”

“They’re all identical, every single one of them,” Berry said. “These don’t address the specific circumstances of their request.”

Federal law does not require rejection letters to be individualized, just that the requests be considered on a case-by-case basis. It’s possible for an officer to read a religious exemption request from a servicemember, deny it, and then print and send a form letter in response, which is how people are informed that they’ve been rejected for all sorts of things, from college admissions to jobs.

Berry and other Christian conservatives are comparing this to how transgender servicemembers were treated during Trump’s transgender military ban.

“When transgender service members were asking for waivers to be allowed to continue to serve, I am very confident that those were handled on a very case-by-case basis and that they were treated in accordance with the law,” he said as if confidence were as valuable as knowledge.

The transgender military ban required all servicemembers to present as their sex assigned at birth unless they obtained a waiver. About a year after the ban went into effect, the Pentagon had only considered two waiver requests.

On the other hand, the vaccine mandate has been in place in the military since just August 25 of this year and many more religious exemption requests have already been processed.

But that hasn’t stopped conservatives from decrying how the military is treating unvaccinated Americans badly.

“This NOT how we should be treating those who protect our nation,” Rep. Lauren Boebert (R-CO) tweeted with a link to the Breitbart News article. Boebert opposes discrimination protections for LGBTQ people.

This NOT how we should be treating those who protect our nation. https://t.co/SaaffmDO5a

Meanwhile, the military already mandates many vaccines for servicemembers to avoid illness and the resulting drain on medical resources. People refusing the COVID-19 vaccines in the U.S. required $5.7 billion in treatment in just three months this summer, according to the Kaiser Family Foundation, because two doses of a COVID-19 vaccine are much cheaper than hospitalization for the virus.

One of the requests that Brietbart News obtained was from a Marine who recently had a miscarriage and “at this time her conscience will not permit her to receive the vaccine and potentially place her fertility in jeopardy.”

While her beliefs may be sincere, there is no evidence, even after billions of people have been vaccinated, that any of the approved COVID-19 vaccines affect fertility. And it’s even less likely that all the COVID-19 vaccines cause infertility.

“There is no plausible reason — no medical or scientific mechanism — for this vaccine to interact with a woman’s reproductive organs or have any interaction with an egg that’s been released or fertilized,” said University of Missouri’s Dr. Laura Morris.

That marine got the form letter, which acknowledged the sincerity of her religious beliefs but said that the health of the military will be compromised if servicemembers don’t get vaccinated. It also informed her of her right to appeal the decision.

Another marine requested a religious exemption, saying that the COVID-19 vaccines were “developed using cells from aborted fetal tissue.” His request was rejected and he got the same form letter.

The vaccines were tested for safety on cells grown in a laboratory from fetal cell lines that were started from aborted stem cells decades ago. The same is true of many other medications that no one is asking for religious exemptions for. They do not contain fetal material.