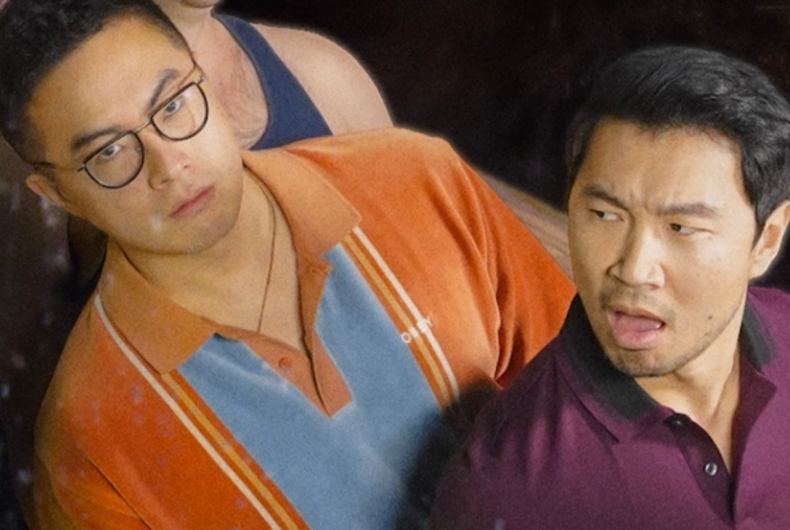 Both Saturday Night Live cast member Bowen Yang and Shang-Chi and the Legend of the Ten Rings star Simu Liu, who are also both Chinese-Canadian actors, have accomplished several “firsts.” For example, Yang became the first Chinese-American cast member of SNL, and one of the few out actors to become full-time parts of the staff. Liu is considered the first Asian superhero in the Marvel Cinematic Universe.

In a skit from this weekend’s SNL episode, which Liu hosted (as the first Chinese-Canadian host, funnily enough), the two talk backstage about how absurd being the “first” at things feels sometimes — although they both secretly revel in it.

Liu agrees, showing off one of his recent “first” awards, a medal that says Liu is the “1st Asian man to move from Canada to America named Simu.” Yang then shares a similar medal, given to him for being the “1st” to do the same, but named “Bowen.”

Then fellow cast member Andrew Dismukes comes in, awarding Yang for being “the first Gay Asian cast member to mispronounce ‘Boutique,'” and Liu is named “the first Asian man to deadpan on Splash Mountain.”

Liu also shows off a title belt deeming him, “the first Asian man to blow up a dragon from the inside.”

“I got the same one, too,” Yang remarks, “but it means something else.”

Other “firsts” that Yang flaunts include the “Michigan Good Job (Asian)” award, while Liu showed off his “first Asian man to beat Starcraft 2” award. SNL cast mate Sarah Schulman then bought him a gift basket in recognition of his title as “Mr. Asian Panera,” for being the first Asian man to “Pick 2” at Panera Bread.

“It’s almost embarrassing,” Yang says of it all, “like, I didn’t even tell anyone about being one of People‘s Sexiest Men Alive,” he claims before footage shows him calling his mom and declaring, “I’m hot.”

Liu asks, “Weren’t you the first bottom guy on that list?”

“I’m not open about that. Who told you that?” Yang responds.

Schulman then returns, saying she has another award for “First Asian man to do a Cher impression on NBC,” but that it didn’t say who it was for.

Both men, pretending they don’t care, quickly jump to try and claim the award, and Liu gets it.

Yang congratulates him, but reminds him, “Whatever first thing you do, I’ll always… be… gay.”

“No!” Liu groans as Yang’s plaque for “First Gay Asian Man to deadpan on Splash Mountain,” featuring Yang right behind Liu, is shown.