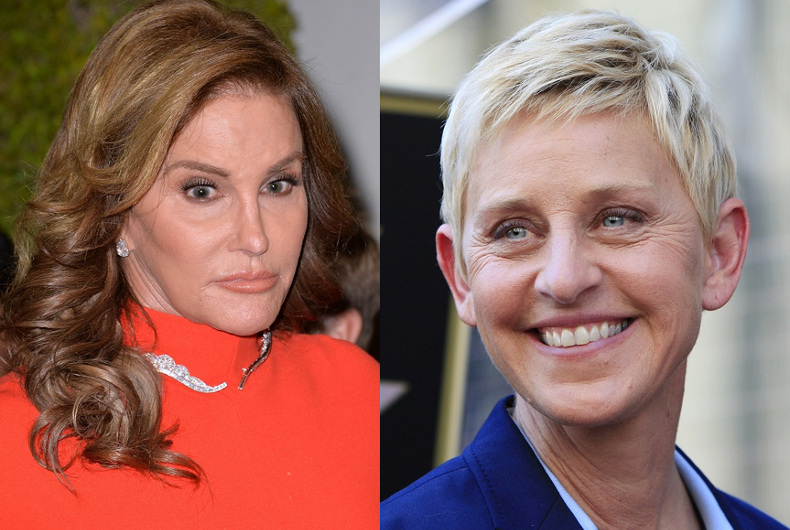 Caitlyn Jenner is still mad at Ellen for allegedly ruining her relationship with LGBTQ people in 2015 when Ellen asked Jenner her position on marriage equality, saying that she almost considered banning her famous adult children from appearing on Ellen’s show.

“I did go on [The Ellen DeGeneres Show], and then I blasted her ass,” Jenner recounted on an episode of Australia’s Big Brother VIP earlier this week.

Jenner publicly announced her transition in 2015 and she went on Ellen’s show to talk about it. On that episode, Ellen asked Jenner about how she’s a conservative, transgender woman and brought up marriage equality, which had just been legalized in all 50 states by the Supreme Court several months prior.

“I have to admit, that… I remember 15 years ago, 20 years ago, whatever it was when the whole gay marriage issue came up, at first I was not for it,” Jenner said at the time. “I thought, ‘I’m a traditionalist….’ It’s always been between a man and a woman.”

She said that her position evolved over time to: “If that word ‘marriage’ is really, really that important to you, I can go with it.”

Ellen pressed back on the show since Jenner did come across as somewhat dismissive.

“Marriage is an important word because marriage is marriage and equality is equality,” Ellen said. Jenner responded that she doesn’t “want to stand in front of anybody’s happiness.”

Several days later, Ellen went on The Howard Stern Show and said that Jenner “still has a judgment about gay marriage.”

“She said, ‘If the word marriage is that important…’ and I was like, ‘It is because that’s the word,'” Ellen said. Stern agreed with her, calling it “remarkable” that Jenner effectively said, “Gee, gay marriage, I don’t get it.”

Stern asked Ellen if Jenner danced with her, and Ellen said, “Maybe she didn’t want to dance with me because I’m a lesbian.”

“This discussion further alienated me from members of the LGBTQ community,” Jenner wrote. “Ellen’s appearance on The Howard Stern Show, where in my mind she even more emphatically took what I said out of context, made it go viral.”

Now on Big Brother VIP – that Australian reality show Jenner filmed when she was supposed to be campaigning to be California’s governor – Jenner said that she was so angry that she considered calling her ex-wife Kris Jenner to stop “any of the kids from being on Ellen.” Their kids include Kendall and Kylie Jenner, and she may have also been referring to her step-kids Kim, Kourtney, Khloe, and Rob Kardashian. Jenner said that she did not follow through with that plan.

“Looking back on it, I could’ve handled a couple of things a little bit differently,” Jenner said about answering Ellen’s marriage question. “I tried to do my best and I thought I did OK.”

“Because I didn’t think she’d respond the way she did,” Jenner said. “And then she goes to me, ‘Well it sounds like you’re really not for it.’ And I said, ‘No, I just said I’m for gay marriage.'”

“The next week, she goes on Howard Stern’s show in New York, radio show, and says I was against gay marriage, and absolutely burnt my ass,” Jenner said on the reality show, misrepresenting what Ellen actually said. “And so, in the media, I got really tough on her.”

Whether or not it’s Ellen’s fault that Jenner feels “alienated” from LGBTQ people, Jenner hasn’t done much to help the issue since 2015.

When she ran for governor of California earlier this year, she opposed allowing transgender girls to participate in school sports, she shared a transphobic joke about an accomplished woman on social media, and she even advocated a “commission” to determine which trans girls are “truly trans” for the purposes of school sports.

Jenner’s trip to Australia less than two months before her election in California came as a surprise this past July. Jenner claimed that she had to participate in the show – and the accompanying quarantines due to the pandemic – because of “a work commitment.” She insisted that her campaign was still in “this race to save CA!”

In September, she received just 1% of the vote in the election, putting her in 13th place among the challengers to Gov. Gavin Newsom (D) in the recall election. Just like with Ellen, Jenner lashed out bitterly at the state of California: “I can’t believe that this many people actually voted to keep him in office. You kind of get the government you deserve.”