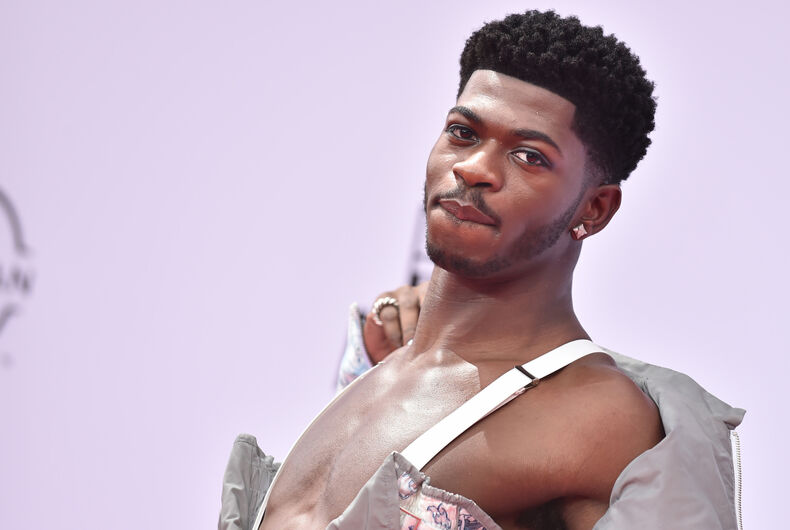 Lil Nas X has been nominated for five Grammy Awards and is celebrating on Twitter. The out superstar’s social media savvy helped make him a star and his willingness to embrace and express his sexuality has made him a standout.

Nas has given Satan a lap dance and danced naked in a prison shower, but his X-rated tweet about his Album of the Year nomination takes it to a whole different level.

Related: Amazon is allowing anti-LGBTQ groups to fundraise on its site as “charities” again

All told, he also garnered a nomination for Best Melodic Rap Performance for “Industry Baby,” and “Montero (Call Me By Your Name)” scored nominations for Song of the Year, Record of the Year, and Best Music Video.

Other out artists also picked up nods from their peers, including Brandi Carlile, Lady Gaga, Halsey, Doja Cat, Japanese Breakfast, Brothers Osborne, Arlo Parks, among others.

“The vast inclusion of LGBTQ artists amongst this year’s Grammy nominees – including Lil Nas X, Brandi Carlile, Lady Gaga, and many others – highlights not only a growing shift in cultural acceptance, but also the dominant impact that LGBTQ artists are making across the music industry,” said GLAAD President & CEO Sarah Kate Ellis. “With five total nominations, including Album of the Year, Record of the Year, and Song of the Year, Lil Nas X continues to open doors for greater LGBTQ inclusion in rap and hip-hop, which will undoubtedly inspire and empower a new generation of artists to embrace their authenticity and individuality.”

🏆 Song Of The Year
• Montero (Call Me By Your Name)

🏆 Album Of The Year
• Montero

🏆 Record Of The Year
• Montero (Call Me By Your Name)

Nas celebrated his first few nominations before the big one hit and things escalated quickly.

“INDUSTRY BABY GRAMMY NOMINATED AHHHHH” he sent, followed by “THE CALL ME BY YOUR NAME MUSIC VIDEO HAS BEEN NOMINATED FOR A FUCKIN GRAMMY LETS GOOOO.”

Then he sent the tweet that earned him the most likes and responses – including a lot from thirsty gay men.

Another sent a photo of Grammy awards lined up in a row with the caption “lil nas’ new babies.”

But one person got “straight” to the point.

“How much for the pants?” they asked.

I really hope you win this one!!! The best album of the year fr fr no skips. Unapologetically raw lyrics and like cmbyn and sun goes down telling the story of queer loneliness and insecurity. Beautiful music pic.twitter.com/21tmLVej6z

don’t have to win a single award, truly thankful for all the insight this year has brought me. and thankful for the journey. love u guys 😭🤍