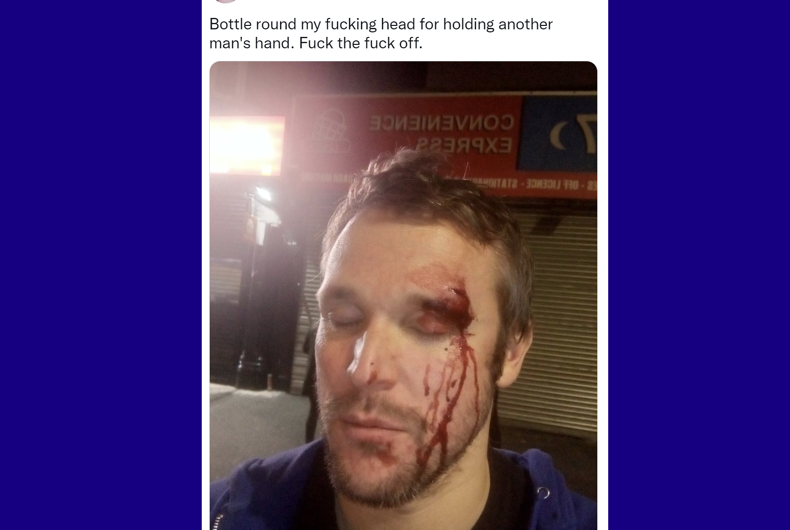 John-Paul Kesseler tweeted about the attack soon after it happenedPhoto: Screenshot/Twitter

In the latest in a stream of anti-LGBTQ hate crimes in the area, an attacker in Birmingham, U.K. beat a 38-year-old man in the face with a wine bottle for holding hands with another man in public.

The incident occurred early Sunday morning near the city’s Gay Village at the end of a night out. The victim, John-Paul Kesseler, was walking to his hotel with a close friend. The pair were holding hands.

Related: An attacker punched a woman in the face for holding hands with her girlfriend

A man standing outside of his car then approached them. “He said we shouldn’t be holding hands,” Kesseler told Birmingham Live, “and I said, ‘What’s the problem?'”

The man then grabbed an empty wine bottle from his car. Kesseler tried to walk away but the man followed and began to beat him with the bottle.

“I didn’t notice him coming and the next thing I knew, I felt bashed round my head. I felt I was bleeding, I could feel blood dripping down my clothes. I was a bit dazed.”

While Kesseler called the police, the man went back to his car to obtain an iron bar, which he used to hit Kesseler again. He then fled the scene.

As he stood bleeding on the pavement, Kesseler said passerby continued to spout homophobic rhetoric, telling Kesseler and his friend, “We do not agree with that LGBTQ stuff.”

Another person told him, “You were asking for it,” according to BBC.

The last few months have seen several anti-LGBTQ attacks in the Gay Village of Birmingham.

In June, a gay couple was left bloody and wounded after being assaulted with knives, and in August, two men in their thirties were attacked with bottles outside of a bar. In September, a 26-year-old woman was subject to a vicious assault. And earlier this month, a gay was was punched in the the face with such force that he was rendered unconscious.

“The atmosphere around the area is different,” Kesseler told BBC. “It doesn’t feel as safe as it did.”

He felt safer three years ago, he said, blaming social media for empowering bigots to express their hatred.

After the attack earlier this month, Police and Crime Commissioner Simon Foster told Birmingham Live that this string of anti-LGBTQ hate crimes is “disgraceful,” adding that police will do everything they can to prevent future attacks.

“Tackling hate crime is a top priority,” Foster said. “It is important that we encourage and facilitate reporting, hold perpetrators to account and ensure that the right support is available at the right time for victims.”