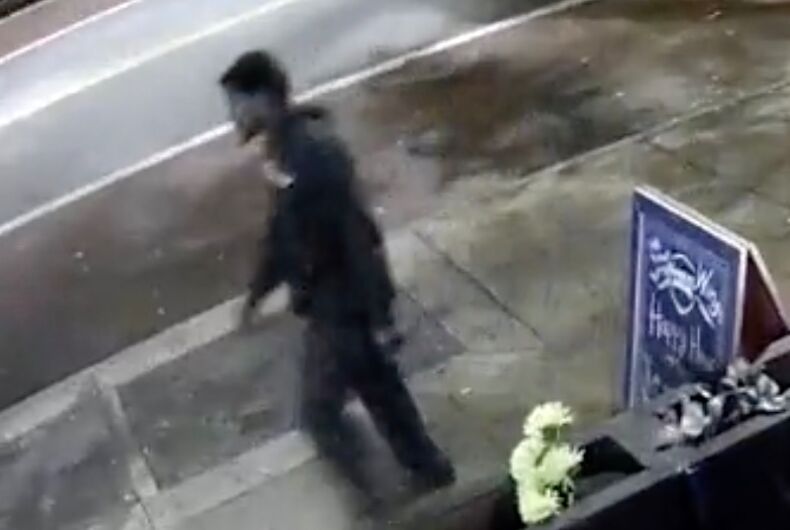 The NYPD is asking for help in its search for the man who attacked a young woman in the East Village because she was holding hands with her girlfriend.

On September 15, the 21-year-old woman was walking with her girlfriend near the corner of East 14th St. and 3rd avenue when the suspect  began yelling anti-gay slurs at them, amNY reported.

Related: Outrage after woman diagnosed with “homosexuality” by her gynecologist

The couple continued walking, but the suspect did not relent. Continuing to spout slurs, he approached the victim and punched her in the face before fleeing the scene. The victim was not seriously injured.

Nearly a month later, the attacker has still not been found. The NYPD Hate Crime Task Force continues to investigate the incident and on Sunday, released camera footage of the suspect walking down the street.

Anyone with information is encouraged to email crimestoppers.nypdonline.org, call at 800-577-TIPS, or send a Direct Message on Twitter to @NYPDTips.

The attack is part of an epidemic of hate crimes currently sweeping New York City.

In early September, a gay man and his friend were viciously assaulted in a Brooklyn bodega by three men yelling anti-gay slurs.

In July, an assailant punched two young men in the face in the New York City subway while making anti-gay statements.

Despite a drop in crime rates overall, the city has seen a massive rise in hate crimes like these.

An August report from the NYPD found that crimes based on sexual orientation are 314% higher than they were at the same time last year. Crimes based on gender are up 8% compared to last year.

How a psychologist & an activist created Coming Out Day decades ago