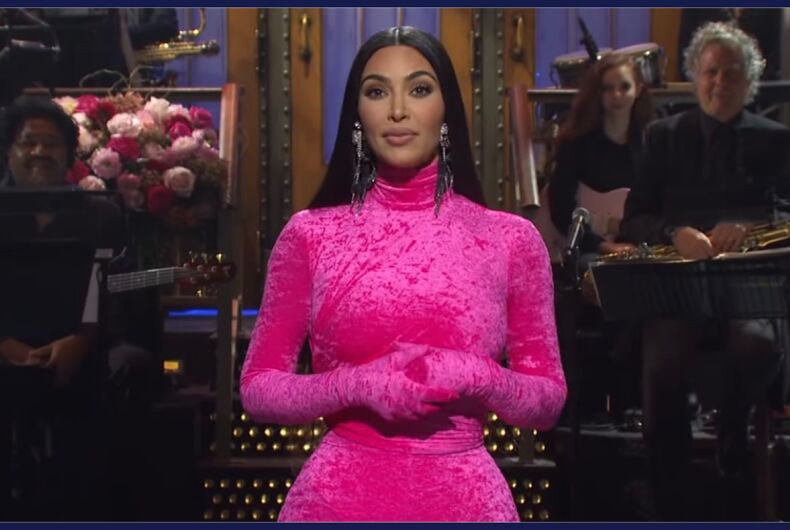 Kim Kardashian West naturally lampooned herself and her family in her hosting debut of Saturday Night Live. The celebrity and former reality show star even made a joke about her mother’s ex, Caitlyn Jenner.

Related: Caitlyn Jenner says GOP leaders were embarrassed to be seen with her in public, but met in private

Kim was speaking about how her family and her upbringing shaped who she is today. She credited her father, late attorney Robert Kardashian, for “really opening up my eyes to racial injustice.”

“It’s because of him that I met my first Black person,” she explained, referencing Robert’s famed friend and client O.J. Simpson. “Want to take a stab in the dark at who it was?”

She joked, “I know it’s sort of weird to remember the first Black person you met, but O.J. does leave a mark. Or several. Or none at all, I still don’t know!”

Kim then said that she’s grateful that Kris chose to name her Kim, and not Karen, which has turned into a pejorative name referring to boundary-breaching white women. “I would never tell anyone what they can and can’t do – I’m a Kim, not a Karen,” the influencer remarked.

“Honestly, with all of the ‘K’ names, it’s really impressive that my mom didn’t pick Karen. Somehow, she just knew,” Kim said.

“I don’t know how she saw that one coming, and not Caitlyn,” she jokes, to a roaring response from the audience.

“I’m just kidding, I’m not running for president,” she quickly says, “we can’t have three failed politicians in one family.”

That joke not only referenced Jenner’s failed run that ended with barely 1 percent of the vote in a runoff held in August, but also her separated husband Kanye West’s run for President in 2020.

In one portion of the skit, Kris Jenner (portraying herself) claimed that she was suing Kendall (played by Halsey) because “She won’t cause any drama and it’s damaging our brand.”

Kendall argues, “I’m a Jenner, not a Kardashian!” Kris replies back, “And that’s something you need to work on, honey!”

“Judge” Kourtney remarks, “Eww, this is so cringe.” She then declares, “guilty.”

While getting bored with Kim and Kanye’s lawsuit over Kanye’s tweets, Kourtney brings out her best friends and “bailiffs,” out actress Megan Fox and rapper Machine Gun Kelly (portrayed by Chloe Fineman and Pete Davidson, respectively). Kourtney and Fox bond over the fact that both of their boyfriends have “tattoos for necks.”

Welcome to The People’s Kourt pic.twitter.com/yaG8is2kIX

Halsey, who has been out as bisexual for years and now uses she/her or they/them pronouns, gave their first two official performances since July, when they gave birth to their child, Endin, with partner Alev Aydin.

Before the show, they joked that they “might skip SNL idk” to instead play with Endin’s “chubby legs and tator tot feet.”

While they really turned up to the show, they were making sure that their child was well-fed prior to taking stage.

First time for everything I guess! Tune into @nbcsnl tonight 😃 pic.twitter.com/BhzkfiNG6w

For their first musical performance, Halsey performed “I am not a woman, I’m a god,” their latest single released last month. They were noted for their futuristic metallic outfit for the performance.

Their second performance was “Darling,” a song from their fourth album If I Can’t Have Love, I Want Power. They were joined by Lindsey Buckingham, the lead guitarist and vocalist for Fleetwood Mac.

I can’t believe I just did SNL for the 5th time!!!!!! It never gets old. Always electrifying and so fun to finally perform the new songs. 🌻⚔️🩸

Honestly would be so fun but they work sooooo hard every week it’s not for the faint of heart! https://t.co/APcHp9bBuN

The first performance is power, cold desolate and intricate: me before. The second is love, lush and organic and dreamy: me after. And how wonderfully they both co-exist! https://t.co/LhdrbwQFSx