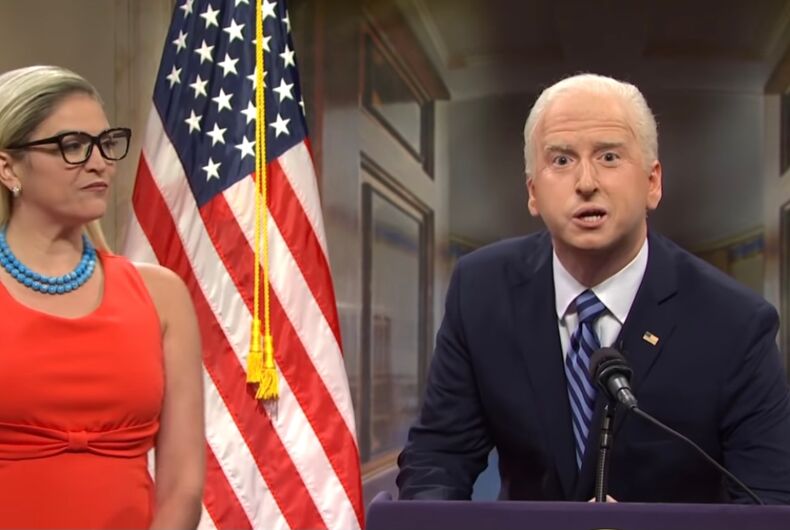 For the season premiere of Saturday Night Live, the variety sketch show came right out and tackled the ongoing negotiations over President Joe Biden’s infrastructure bill in the episode’s cold open.

Newest featured cast member James Austin Johnson led the way by portraying Biden, a twist of sorts since he’s known for his impressions of Donald Trump. He was flanked by progressives Rep. Alexandria Ocasio-Cortez (D-NY) and Rep. Ilhan Omar (D-MN), and “moderates” Sen. Joe Manchin (D-WV) and out Sen. Kyrsten Sinema (D-AZ), as they tried to negotiate because Biden believes “we’re all on the same page.”

Ocasio-Cortez was portrayed by Melissa Villaseñor, Omar by Ego Nwodim, Manchin by Aidy Bryant, and Sinema (D-AZ) by Cecily Strong.

“What do I want from this bill? I’ll never tell,” Sinema quipped, “Because I didn’t come to Congress to make friends, and so far, mission accomplished.”

Biden quips after, “Doesn’t she look like all the characters from Scooby-Doo all at once?”

At one point, Sinema tells Biden, “I want no roads.” Biden asks her, “Why?”

At one point Biden asks Sinema what she actually likes, and she answers, “Yellow Starbursts, the film ‘The Polar Express’ and when someone eats fish on an airplane.”

She says, “Look, as a wine-drinking bisexual triathlete, I know what the average American wants. They want to be put on hold when they call 911. They want bridges that just stop with cars that fall down, they want water so thick, you can eat it with a fork.

“I will fight for that, no matter what… unless my foot hurts, then I’ll go back to Arizona,” Sinema pledges.

In conclusion, even with some attempted help from former New York Gov. Andrew Cuomo (portrayed by Pete Davidson) and Senate Majority Leader Chuck Schumer (portrayed by Alex Moffat), the Democrats realize they have only one thing in common and are all the same: