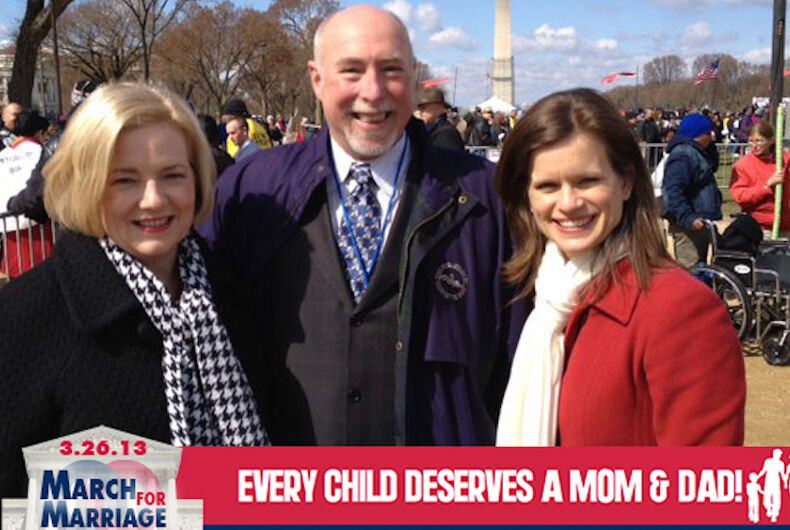 For years, Frank Schubert has campaigned against any form of LGBTQ progress in California.

So why is Schubert now urging voters to support a lesbian as California state attorney general?

Related: DC Comics reveals that its new Superman is bisexual

Because the candidate is his sister.

Schubert is the mastermind behind the notorious Proposition 8, the 2008 ballot measure that banned marriage equality in the state. He parlayed that experience into a lucrative career promoting anti-marriage measures in states across the country.

Even after the Supreme Court legalized marriage equality, Schubert was out at (sparsely attended) rallies, proclaiming that “it will only take one new justice on the Supreme Court” to reverse Obergefell v. Hodges, the case that prohibited states from banning two people of the same sex from marrying.

Despite Schubert’s unparalleled record of promoting anti-LGBTQ discrimination, his actions never seemed to cause a rift with his sister, Anne Marie Schubert, who raised two children with her partner. Anne Marie is now the Sacramento County District Attorney with an eye on the state’s Attorney General’s position.

To help support her, Frank is advising a group called “Public Safety Leaders & Victims, An Independent Committee Supporting Anne Marie Schubert for Attorney General 2022.” The group has a tough law-and-order message, which is entirely in line with Anne Marrie’s own philosophy.

Indeed, the San Francisco Chronicle described Anne Marie as “the person Republicans would cook up in a laboratory as their perfect candidate for Attorney General.”  However, California is so deep blue that it hasn’t had a Republican win statewide office since Arnold Schwarzenegger was elected governor in 2006. Perhaps that’s why Anne Marie dropped her GOP party registration and has now branded herself an independent.

However, having Frank for a brother isn’t exactly a boost in a state that elected Joe Biden by nearly 30 percentage points.

“Schubert in California is a total pariah,” Fred Karger, the gay rights activist who ran for president as a Republican, told the San Francisco Examiner. “He’s been run out of California, so I’m not sure what this is all about.”

On the other hand, Frank doesn’t think his reputation would be a hindrance to his sister’s campaign at all.

“I don’t think it will have any impact,” he told the Examiner. “If you’d listened to news articles, this was going to be a big problem for her running for district attorney, and yet it had no impact whatsoever on people supporting her independently.”

But Anne Marie already has an uphill battle. While the current state AG, Rob Bonta, has a relatively low profile in the state, he will have the full support of the Democratic party behind him. Anne Marie may style herself as an independent, but her main support will come from what’s left of the state’s GOP.

Making inroads with other voters will be an uphill battle. Having Frank Schubert as your brother and campaign supporter makes it Mount Everest.