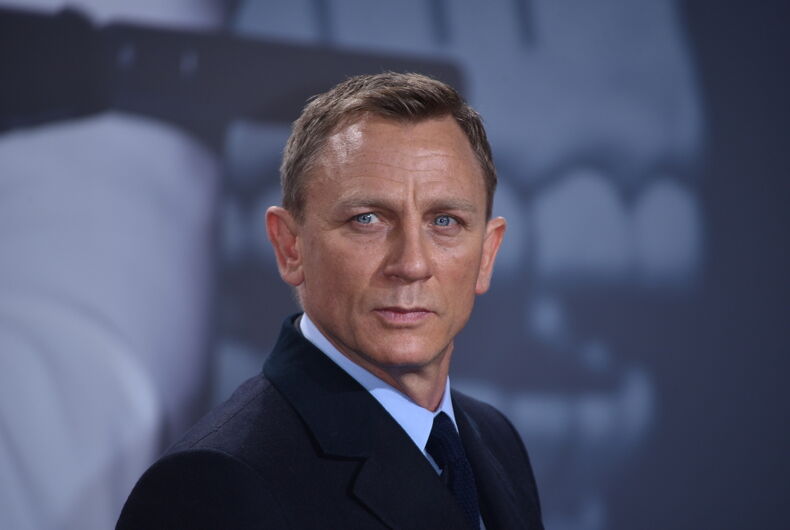 Actor Daniel Craig on the red carpet in Berlin in 2015.Photo: Shutterstock

The actor candidly talked about his sexuality, why he goes to gay bars, and the night he was spotted kissing another man in a California bar.

Bozzi was spotted having “an open-mouth passionate French kiss” with the James Bond star in 2010. Bozzi is now married to Bryan Lourd, director and co-chair of the Creative Artist Agency and Star Wars actress Carrie Fisher’s former lover.

“It was definitely Daniel Craig and he was most certainly making out with a guy,” tabloids reported at the time. “In fact, Daniel held the guy’s head in his hands and pull[ed] him in for the kiss!”

“If I hadn’t seen it with my own eyes I would not have believed it.”

“For me, it was one of those situations and, and, and the irony is, you know, we kind of got caught, I suppose, which was kind of weird cause we were doing nothing fucking wrong,” Craig said to Bozzi.

“What happened is we were having a nice night and I kind of were talking to you about my life when my life was changing and we got drunk and I was like, ‘Oh, let’s just go to a bar, come on, let’s fucking go out.’ And I just was like, I know don’t give a fuck and we’re in Venice [California].”

“[It] is like, fuck it, everything’s fine. Don’t worry about it. We got your back, right,” he said, noting that the state’s “spirit” is what made him move there. “Everybody’s in, there’s something magical about it. And that was there that night.”

“I’ve been going to gay bars for as long as I can remember,” 007 added, saying he got tired of the toxic masculinity at straight bars.

“One of the reasons, because I don’t get into fights in gay bars that often… because the aggressive dick swinging in hetero bars, I just got very sick of [it].”

“As a kid because it was like… I don’t want to end up eating in a punch up. And I did. That would happen quite a lot. And it would just be a good place to go. Everybody was chill, everybody. You didn’t really have to sort of state your sexuality. It was okay. And it was a very safe place to be.”

Still, it wasn’t all just for the friendly camaraderie with other men.

“And I could meet girls there, cause there are a lot of girls there for exactly the same reason I was there,” he said. “It was kind of … an ulterior motive.”

The actor, who has been married to actress Rachel Weisz since 2011, has not come out as bisexual and publicly identifies as straight.