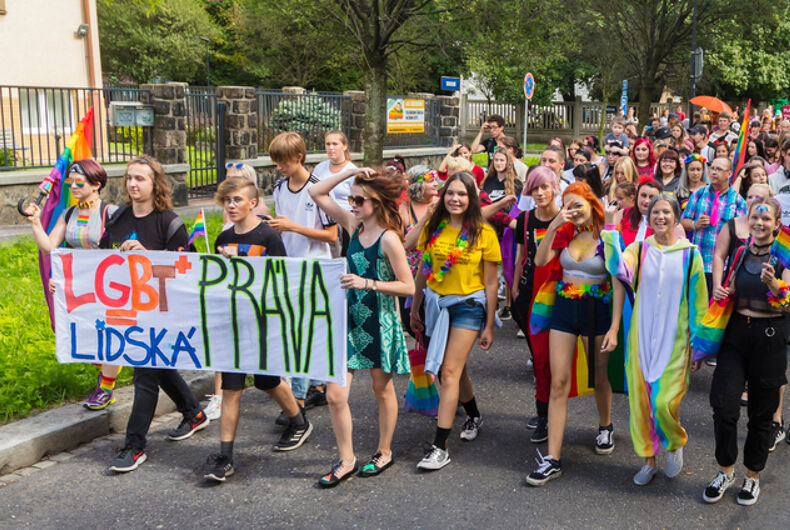 On Saturday, Czechs went to the polls in a dramatically close race and chose “democratic opposition” over the currently ruling populist billionaire Prime Minister, Andrej Babis. While many celebrate this as a victory for democracy in the Czech Republic (Czechia), it is bittersweet for the LGBTQ community fearing the most conservative Parliament in the history of our country.

There are many reasons to celebrate, Babis has lost a majority, the nationalist ultra-right party (SPD) has lost two seats, the Communist Party has for the first time not managed to get into the Parliament and we will likely have a pro-European Union (EU), pro-NATO government. However, the cost of it all is the progress and possible regression in the rights of queer persons.

As it stands, Czechia is the 7th worst when it comes to LGBTQ legislation in the EU. We do not have marriage equality, there are no hate crime laws protecting our often targeted community and our country continues to forcibly sterilize trans persons if they want their legal gender changed.

Marriage equality serves as a good indicator of the current state of LGBTQ acceptance in Czech politics.

The marriage equality campaign “Jsme Fer” has organized a group of Parliament members (MPs) and put forward an Equal Marriage Bill that most of our community across the spectrum rallied behind, symbolizing a turning point for LGBTQ rights and acceptance in the country.

Yet, over three years passed and the bill was buried with the ending of the Parliamentary cycle. Now, the new Parliament seems much less likely to table the bill again.

Out of the main advocates for queer rights, few have been re-elected with its main proponents Frantisek Kopriva and Barbora Koranova not making the cut. On the other hand, the ultra-conservative Christian party (KDU-CSL) has seen its best results since 1989, managing to get 23 seats in the chamber. As it stands, there are between 50-55 (out of 200) pro-equality MPs, with many who publicly oppose it and most who refuse to take a stance on our rights.

Out of the five parties that are likely to form the new right-leaning government, only one, the Pirate Party has been firmly advocating for LGBTQ rights (with only four MPs). And many from our community are worried that there is a real possibility of regression due to the strong influence of the Christian democrats and the ultra-right openly queer-phobic SPD in opposition.

There are many laws in the air, not just marriage equality and our community is now becoming the target of hateful attacks that we have no legal protection from.

The fear of regression is especially felt across the trans community. The Czech Republic withstands the EU push for depathologization and, above all else, continues the inhumane practice of forced sterilization of trans persons. The new conservative majority is unlikely to change that and many fear that further regression and access to health care might be at risk for trans persons.

That is mainly due to the unprecedented scapegoating of the LGBTQ community that has dominated the election campaigns across nearly all parties.

It all started with the Czech president who infamously called trans people “disgusting” in June (I sent him a letter asking for an apology co-signed by over 5000 citizens but never got a reply) and culminated with the ultra-right party and one of their slogans that “there are only two genders, penis and vagina.”

I have often been the target of gross hate speech and death threats against me and my friends working with me.

The most unsettling however was the outright homophobia from the very man set to become the next Prime Minister, Petr Fiala. He wrote in a campaign book that “same-sex couples cannot create a family equal to the natural one” and that “society must do more to protection ‘traditional’ family in the interest of its survival.”

I called out his homophobia and scapegoating but he never apologized. Later when I went on TV to comment on the issue, I was referred to as the deranged activist that wants to make LGTBQ people a privileged part of our society.

A couple of weeks after the incident, the leader of the Christian party said that he would never enter a government that would support equal marriage, outlining it as one of the primary points of negotiations for the future cabinet. While he later stepped back from the demand, it is likely that with the newly gained influence he will continue to rally against LGBTQ rights as part of the government.

Unsurprisingly, the election campaign scapegoating from the highest-ranked politicians resulted in the rise of negative tendencies against our community. With one the head of the local gay media outlets attacked simply for holding his boyfriend’s hand by a group of men yelling “faggots.” Such incidents are coupled with growing antipathy towards activists and the topic of LGBTQ rights in general.

Overall, while celebrating a pro-democratic government we must realize the setbacks it signals to our fight for equality in Czechia. We must reorganize, support each other and develop new strategies to push for the acceptance of our community.

And we might need your help, the US must become a stronger champion of pro-LGBTQ policies, not just in Hungary but also in the Czech Republic. Biden’s agenda needs to be heard louder, both on the international stage but also through its embassies and all bilateral relations.

I hope that we will be able to fight off any attempts at regressive policies. Progress, however, and the passing of the Equal Marriage Bill sound all too dreamy today and for the four years to come.

Krystof Stupka is queer activist from Czechia and founder of reclaimpride.cz