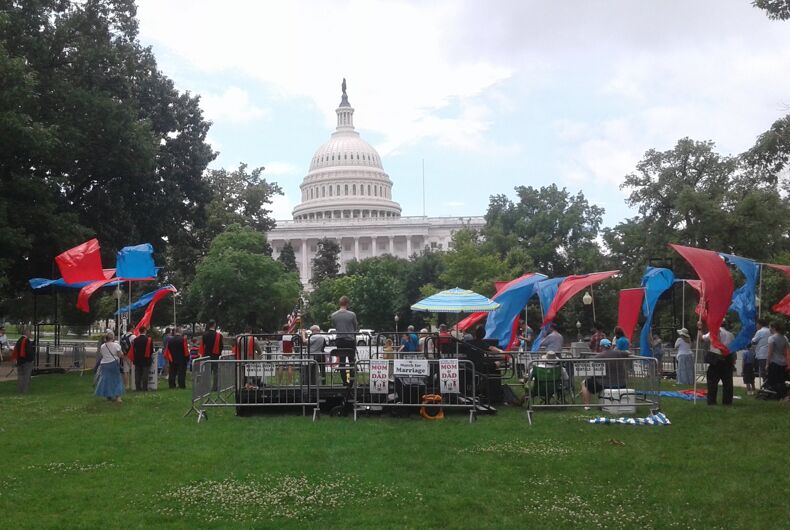 This weekend, after months of fundraising asks and announcements on Twitter and on their mailing list, the National Organization for Marriage (NOM) held a rally and a march in Washington to demand that the government ban marriage between two people of the same sex.

And only 47 people showed up.

Beth Ethier, a Slate writer who attended the rally, tweeted that she counted every attendee, including babies, and saw only 47 people at the rally.

Update: I was able to count every attendee. There are 47 including babies. pic.twitter.com/a8bXeCIHz6

She also got a picture of the “around 30” people who actually listened to NOM president Brian Brown’s speech.

Right Wing Watch‘s Miranda Blue also attended the rally and said that passersby confused it with a “kite festival.”

Brown told the crowd not to be dismayed by the lack of attendance at the rally, comparing their attempts to ban LGBT people from marrying to the abolition of slavery. “We are on the side of true human rights, we are on the side of true civil rights. And in every fight for civil rights, it took a creative minority who were willing to stand up and speak truth to power no matter what the cost. And you know what? There may not be thousands of us here today. It doesn’t matter. There were only a few that stood with William Wilberforce when he stood up and said ‘no’ to the slave trade in England. He was mocked, he was derided, he was laughed at. We remember him as a hero now, because ultimately his life’s work was successful, but it wasn’t successful in his own lifetime.”

NOM strategist Frank Schubert also addressed the crowd, saying “it will only take one new justice on the Supreme Court” to reverse Obergefell v. Hodges, the case that prohibited states from banning two people of the same sex from marrying. Because while the right loves to decry “unelected judges” making decisions that affect people, they get really excited at the prospect of having conservative ideologues enact policy from the bench.

Brown promised that the rally would happen next year, even if only one person shows up. At this rate, that might just happen.

Gay man who threatened Pulse-style shooting is back in jail