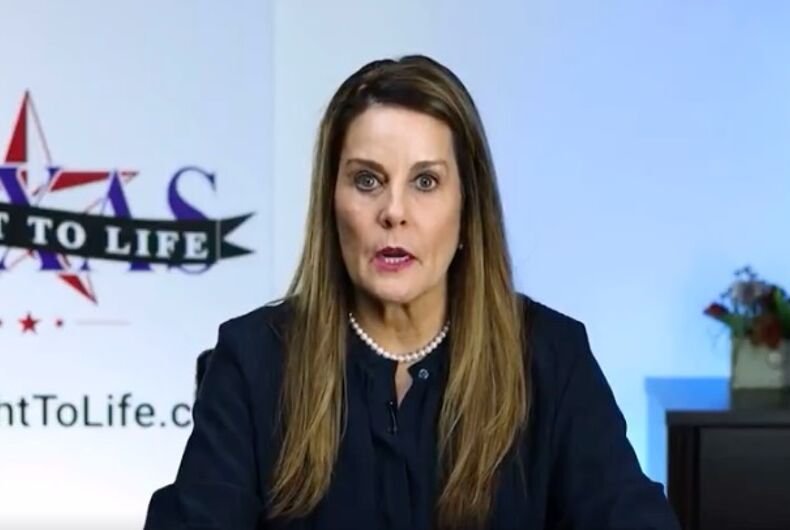 A video from Texas Right to Life encouraging resident to turn in women seeking an abortion for a cash reward is being compared to The Handmaid's Tale.Photo: Screenshot

The Texas Right to Life has put out a dystopian video encouraging residents to turn in women who have had abortions along with any healthcare providers along with anyone who “assists” like an Uber driver that takes the woman to a clinic.

The video is being compared to The Handmaid’s Tale for the announcer’s dead eyes and chilling demands of listeners, at one point calling pro-choice advocates “those who worship at the altar of child sacrifice.”

“This is not at all dystopian,” journalist Mark Joseph Stern posted on Twitter along the video.

The law allows anyone in the state to sue for a $10,000 bounty if they think someone has carried out an abortion after the sixth week of pregnancy or even helped in the procurement of an abortion, like a cab driver or clinic receptionist.

A website allows people to leave anonymous “tips” about anyone they suspect of abetting an abortion. Social media has promoted a plan to flood the site with fake tips, causing it to go down for a while yesterday.

“Those who worship at the altar of child sacrifice tried to shut down [the website],” the announcer intones, “but the site is still functioning and active and awaiting your reports and findings.”

Texas Right to Life: "Those who worship at the altar of child sacrifice tried to shut down https://t.co/T8ifVaJtgs, but the site is still functioning and active and awaiting your reports and findings." https://t.co/f7rfhtSK01

Holy fuck. This woman is straight out of The Handmaid’s Tale!!!!

I'm sorry but "Right to Life" ? These people aren't pro life. If they were they would be protesting against the military, standing with BLM against police brutality, and encouraging others to get vaccinated.

Jesus that is dark. The music really pushes it over the edge.

This is not an outtake from Handmaid’s Tale.

This is what radical minority rule looks likes. In the early stages, before it's foot soldiers-fellow Americans – feel completely emboldened by being able to freely act on their hatreds, with impunity.

PHOTOS: 6 ordinary guys from across the globe who celebrate gayness in difficult places