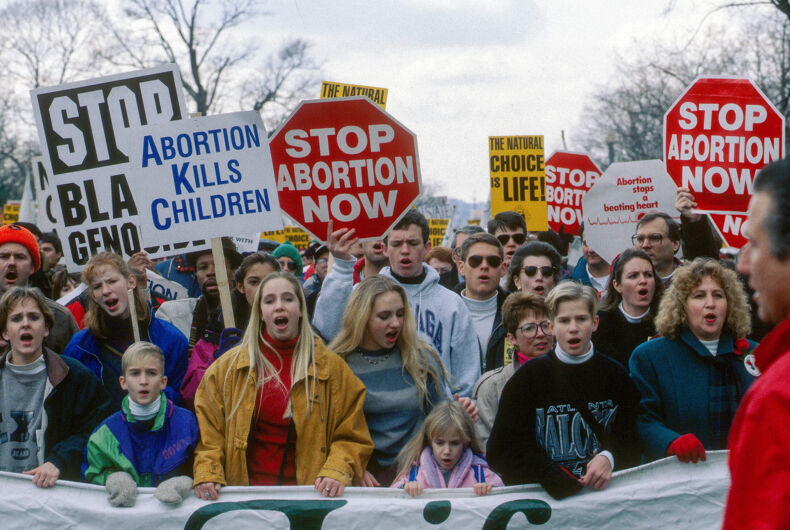 Texas Right to Life’s anti-abortion whistleblower site has found a new home on a web hosting service popular with right-wing extremists and neo-Nazis. Even so, the site’s aims may be even too extreme for its new far-right hosts.

The site, prolifewhistleblower.com, asks people to leave anonymous tips reporting doctors, clinics or other individuals that may have helped women get an abortion after a fetal heartbeat is detected. A new Texas law forbids such procedures and offers a $10,000 reward to any private citizen who successfully sues somoeone who “aids or abets” an abortion.

GoDaddy, the site’s initial web hosting service, booted it last Friday. GoDaddy’s policies forbid sites that “collect or harvest” information about people without their consent and ones that “violate the privacy rights of any other person or entity.” GoDaddy gave the site 24 hours to find a new home.

Texas Right to Life apparently turned to Epik, a web hosting service that also hosts other far-right websites. Some of its clients include the so-called “free speech” social network Gab (popular with QAnon, neo-Nazis and other anti-Semites), the anti-queer conspiracy theory web show InfoWars as well as the anti-LGBTQ YouTube alternative BitChute (whose videos conflate homosexuality with child rape).

Epik also once hosted the neo-Nazi site The Daily Stormer and agreed to work with the pro-violence bulletin board 8chan, though Epik later backed away from hosting the latter.

Even so, Texas Right to Life’s aims may go too far for Epik.

“We received complaints about the site,” an Epik representative said in a statement late Saturday, according to The Daily Beast. The representative said that the site  “violated Epik’s Terms of Use” forbidding the “collection of information on third-parties without their consent.”

Epik said, “We contacted the owner of the domain, who agreed to disable the collection of user submissions on this domain.” However, it’s entirely possible that Texas Right to Life may still try and collect tips via email or other methods.

Texas Right to Life has been having a tough go since Texas passed its hardline anti-abortion law. The website has been flooded with fake tips and distributed denial of service (DDOS) attacks meant to overwhelm its traffic capacity, crashing the site.

On Friday, a Texas state judge ruled that the anti-abortion group and its associates couldn’t sue workers at Planned Parenthood’s reproductive health clinics.

Bigots got an LGBTQ history display booted from the Missouri capitol