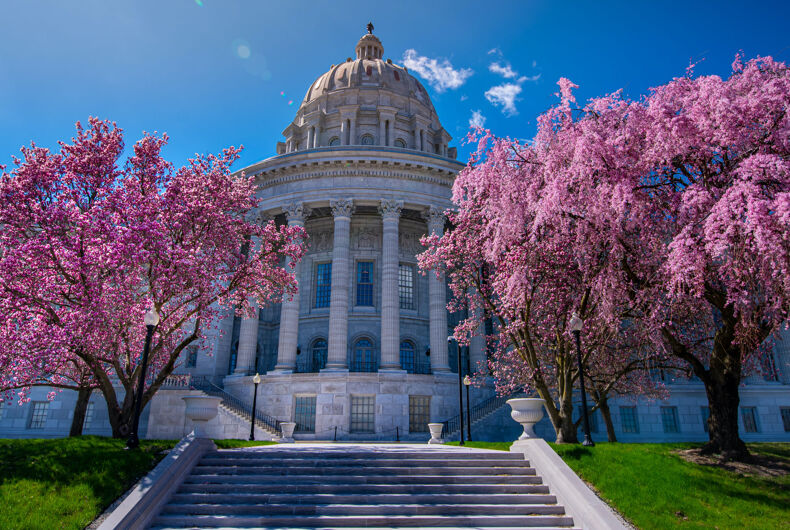 Bigots’ complaints got an LGBTQ history display removed from the Missouri capitol building just four days after it went up. Even worse, the state’s Republican Governor Mike Parson gave a flimsy explanation for its removal.

The display, entitled “Making History: Kansas City and the Rise of Gay Rights” highlighted Kansas City’s role in the national LGBTQ rights movement. Students from the University of Missouri-Kansas City created it. It was displayed in the first floor of the Missouri State Museum on Sunday, August 29. It was intended to remain until December 26.

However, the state’s Department of Natural Resources quietly removed the display after just four days. When asked, the department refused to say why it was removed or who decided to remove it, The Kansas City Star reported.

The removal occurred two days after Uriah Stark, an aide to Republican State Representative Mitch Boggs, complained about it on Facebook.

“So is there any good reason that our taxpayer-funded museum is pushing the LGBT agenda in our state capitol?” Stark wrote in a public Facebook post on August 31. “These are literally in-your-face banners that you can’t walk through the museum without seeing… and they’re scheduled to be there through December.”

After the display was taken down, he wrote in a follow-up post, “Thanks to the efforts of several of our great elected officials, the exhibit has been removed from the Missouri State Museum! To God be the glory! … I also spoke with multiple other elected officials who were ready and willing to take action, thank you all for standing for traditional family values!”

When asked about the display’s removal, Kelli Jones, Parson’s communications director, said that the governor didn’t give his required approval for the display. She added that all museum displays must be approved by the Board of Public Buildings. The board consists of Parson, Republican Lieutenant Governor Mike Kehoe and Republican Attorney General Eric Schmitt.

But despite Jones’ explanation, the board’s meeting minutes, examined by the Star showed that the board hasn’t discussed approval for any temporary museum displays since 2015. That is, even though other displays have gone up since that time, the Board hasn’t bothered approving any of them.

The incident has angered Democratic state senator Greg Razer, the state’s only out gay senator.

“There is NOTHING controversial about an exhibit that explains how members of the LGBT community fought to end persecution and demand rights as citizens,” Razer tweeted on Thursday. “I’m extremely disappointed and angry that Missouri State Parks may think otherwise.”

“One of the most trusted and beloved state agencies felt it was easier for them to bend to bigotry than it was for them to have a backbone for a marginalized group of people,” he added. “It’s really that simple.”

Razer has called Jones’ explanation “a convenient excuse.” He has promised to attend the next meeting of the Board of Public Buildings to demand answers about the display’s removal.