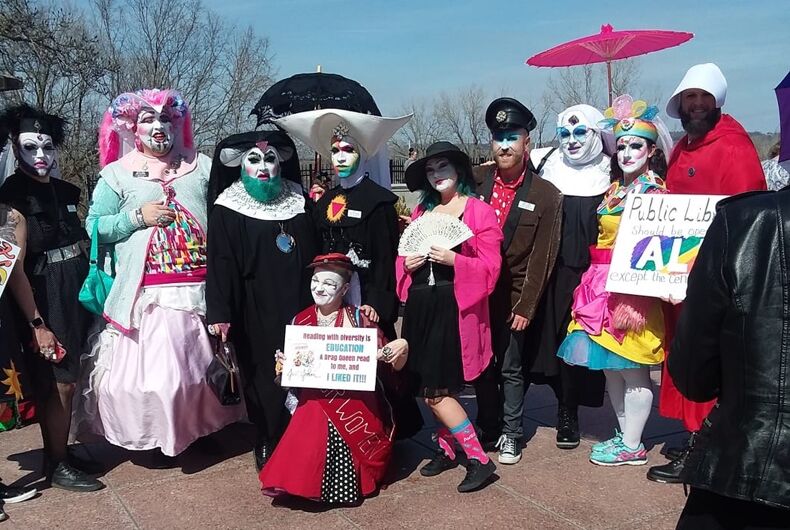 Drag queens descended on the Missouri state capitol to protest a bill that would jail librarians.Photo: Facebook/Holly McDorman

Hundreds of protestors descended on the Missouri state capitol over the weekend to protest a Republican bill that could imprison librarians who host a drag queen story hour or allow youth to check out books on LGBTQ topics. The event was led by drag queens and librarians.

Drag queens, who don’t usually back down from bullies, planned a massive protest  and put out the call for queens from around the nation to join them “to show Ben Baker and the legislature this kind of bill is just bad policy.” And that’s exactly what they did.

Joined by progressive organizations around the state, the queens brought a salty attitude and children’s books to the capitol steps. They chanted, read books to kids, and made salty speeches.

In short, like with any good drag show, the attendees enjoyed themselves.

More than 50 children were at the event, but parents had to erect rainbow umbrellas next to them to block their view of religious right protestors across the street.

“We want to emphasize a love of reading and a love of learning to kids,” Pasha Eve, co-founder of the Parasol Patrol, said. The group brings the giant umbrellas to events that would draw protest from the religious right.

“It is a way to learn how to interact with different people from all different walks of life.”

Baker denies that his legislation would ban the books since they would be moved to a “restricted” area of the library, he doesn’t deny that his motivation is the recent “drag queen story hour” trend that has performers reading age-appropriate books to children.

The bill has not been assigned to a committee and isn’t expected to pass following national outrage.

My daughter loved all of the sparkles! 🌟

Thank you for such a wonderful day!