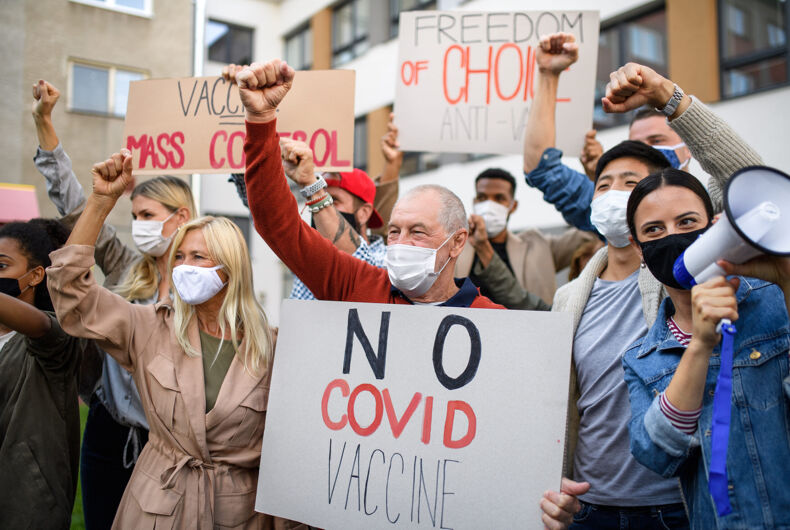 Anti-vaccine and anti-mask activists have begun targeting school children and vaccination sites. Their efforts represent an escalation in right-wing attempts to stop the so-called “medical tyranny” of COVID-19 prevention efforts.

Roughly 15 protesters descended on Skyview after a parent became angered over their student’s refusal to wear a mask, as required by the Vancouver School District. The protest group included members of the anti-LGBTQ, white supremacist groups The Proud Boys and Patriot Prayer, according to The Columbian.

School security and administrators kept the protesters out of the building, but the schools remained under lockdown, denying entry to visitors but continuing classes otherwise. The school has since said it’s working with the parent to reach a solution.

“Regardless of one’s stance on mask mandates, I think most parents in our community agree that protesting at our school campuses and disrupting the school day is not in the best interest of students,” Vancouver school board president Kyle Sproul told the publication.

While on school grounds, the protesters yelled at a student, telling him that he needed to take his mask off. The young student later went to talk with counselors because he was upset, NISD executive director of communications Barry Perez told the San Antonio news website MySA.com.

The protesters also confronted the school’s principal. Although protesters left after police asked them to, the school has asked police to provide extra security during the coming week, in case the protesters return.

In the last weekend of August, anti-vaccination protesters shut down a mobile vaccination clinic in Georgia after protesters threatened health care workers and people wanting vaccinations.

While anti-vaxxers and anti-maskers used to demonstrate at school board meetings and public health authorities, these new developments suggest that they’re changing their tactics. The optics, however, could ultimately work against their aims.