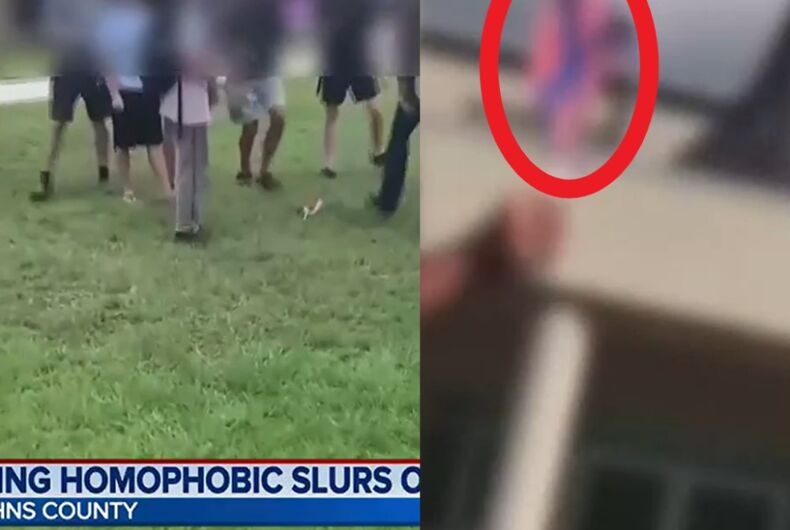 Parents are speaking out against a hateful and “terrifying” rally some students put together at Bartram Trail High School in Florida that involved shouting anti-LGBTQ slurs, stomping a Pride flag, and threatening members of the school’s gay-straight alliance (GSA).

Cell phone footage shared with the media shows students yelling anti-gay and anti-transgender statements like “There’s only two genders, faggot!” repeatedly at another group of students.

Related: A gay 12-year-old died by suicide after relentless bullying. His mom says the school did nothing.

One of the anti-LGBTQ students waved what looks like a hand-made Confederate flag, and students stomping a Pride flag can be seen in another video from the rally.

“It was terrifying; it was absolutely terrifying,” one mother told Action News Jax, who said that the Pride flag was ripped out of her daughter’s hands.

She said that her daughter was one of the students targeted by the rally, and that it occurred after school this past Friday.

“She’s approached by one of the boys, who started yelling at her saying, ‘You’re gay. You have no rights,’ and kind of spitting at her,” the mother said. “She walked past it and got on her bus.”

“Enough is enough. It is time for that school board to take action at that school, and it needs some serious new leadership,” she said. “I think if you show that level of hate or attacked at people just for people being who they are, there’s no tolerance for that.”

So far the videos have been shared with local media, which has been protecting the identities of the students due to their ages. But parents who have seen the videos in full say that they are “scary” and have turned them over to police.

“It was shocking,” another mother told News4Jax. “It was scary. It made me wonder what could possibly happen at this school to put students in danger.”

“And it was kind of akin to videos you would see in the early 1960s, during the Civil Rights Movement.”

A spokesperson for the St. Johns County School District confirmed that the incident happened at the school and said that students involved will face consequences.

“School officials are actively addressing the incident and students involved will receive consequences that align with our student code of conduct,” the spokesperson said.

The St. Johns County Sheriff’s Office said that the videos were sent to their youth resource division and that they are working with the school to address the incident.