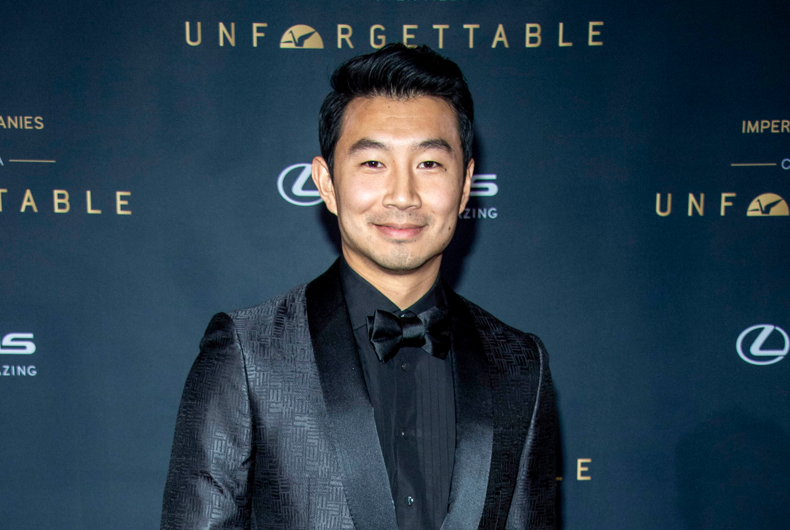 Actor Simu Liu, the star of the latest Marvel action movie Shang-Chi and the Legend of the Ten Rings, is embroiled in controversy over alleged Reddit comments he made about how pedophilia is “no different from being gay.”

Neither Liu nor representatives for Marvel, which is owned by Disney, have not commented on the matter yet as the blockbuster film continues to bring millions at the box office.

Related: Tom Holland would be okay playing a gay Spider-Man, but don’t hold your breath

Prior to the titular role in the blockbuster Shang-Chi, the Chinese Canadian actor was known for playing Jung Kim in the Canadian sitcom Kim’s Convenience from 2016 to 2021. The Marvel film marks not only his first film as the lead actor, but one of his first top-billed acting performances on the big screen.

But years-old comments from a Reddit account called NippedintheBud, which Liu used for verified “Ask Me Anything” (AMA) sessions on the social media platform, have resurfaced.

In one lengthy post in 2015 made in reply to a discussion on the sub-reddit r/WorldNews, NippedintheBud – who said that he’s a Canadian actor – explained his experience having recently played a pedophile and what he learned from his experience and “a significant amount of research.”

“From a biological standpoint it’s no different than being gay — a small mutation in the genome that determines our sexual preferences,” he said. “Depending on what area of the world you were born and what time, it also may have been a perfectly acceptable thing to act on those urges.”

“Now, we all know that taking advantage of minors is wrong. Disgusting and vile, even. But with the exception of Germany we are going about it completely COMPLETELY the wrong way,” he continued. He then called the “‘cures’ to pedophilia” the same to “conversion therapy and whatnot.”

The comment got attention on the platform, both positive and negative. NippedintheBud, in an edit to his original comment, thanked someone for giving him a gold award, which is used to show approval on Reddit.

“So my first gold was a sympathetic post toward pedophiles. AMAZING!” he wrote. “Honestly, it goes to show that Reddit is capable of tremendous compassion.”

In 2019, NippedintheBud did an official “Ask Me Anything” session on the subreddit forum for Kim’s Convenience, saying that he is Liu and answering questions from fans.

A headshot of Liu was also posted on another forum prior to the AMA, asking for feedback on its professionality. The account has since been deleted, although archives of it and its comments remain.

For those asking if this is really his account, here's him doing an AMA on the Kim's Convenience subreddit 2 years ago https://t.co/TjJ5eHO4D1 pic.twitter.com/SyYsffLpnk

Several other comments from the account have shocked online users as well.

“I am all about the gender equality however girls are just not as good as boys at sports and whenever I play volleyball with a girl on the team I always get frustrated,” NippedintheBud wrote in 2014. “Sometimes I say things. Back me up here fellas. It’s just different.”

The Advocate reports that Liu is accused of making other racist and misogynistic remarks using the account.

Online commenters claim that many of the posts were taken out of context and misrepresent Liu’s intention. Some have denounced further claims that Liu was part of a group of “incel” users or that he moderated a group attacking Black women. One user claimed that in context, Liu was being sarcastic with his remarks about pedophilia.

It shows him commenting in the racist incel subreddit called into question (among other things) pic.twitter.com/SXyoKu2Kaf

A) This subreddit was not an incel subreddit in 2016. It was just a subreddit for Asians. Not Asian men – Asians period.

B) Simu found this post because… it’s about Kim’s Convenience. All FOUR comments he made are on the same post. pic.twitter.com/DGVSBvgM1A

Do I think the comparison between gay people and paedos is great? Nah it’s pretty awfully worded and structured.

Since premiering last month, Shang-Chi has grossed over $300 million as it opens across the world — except in China, where the state approval of the film is necessary for it to be screened legally in the country. Previous remarks made by Liu that have been taken as disparaging of his home country have reportedly jeopardized that approval, which notoriously censors and restricts any content or any content including someone openly critical of their government.

Liu referred to China as a “Third World” country where people “were dying of starvation” in a 2017 interview.

On September 16, the night much of the comments made by Liu’s apparent Reddit account were posted, he replied to a 2019 tweet, which said in part, “I do not ever EVER advocate for anything other than positivity.”

“Twitter is a slanderous place sometimes, and it feels good to shut down trolls and bad faith actors who want to drag your name through the mud,” he wrote in another tweet.

He then posted pictures of him meeting musician Alicia Keys and actress Gemma Chan, and has otherwise not posted on social media or commented publicly.

Liu is not the only Shang-Chi star facing controversy or backlash. Comedian and lead actress Awkwafina has been openly questioned about her alleged past cultural appropriation, such as her name and accent that has earned her accusations of “Blackfishing,” or adopting behavior modelled after negative stereotypes of Black people.

Oh cool this is here

Twitter is a slanderous place sometimes, and it feels good to shut down trolls and bad faith actors who want to drag your name through the mud.