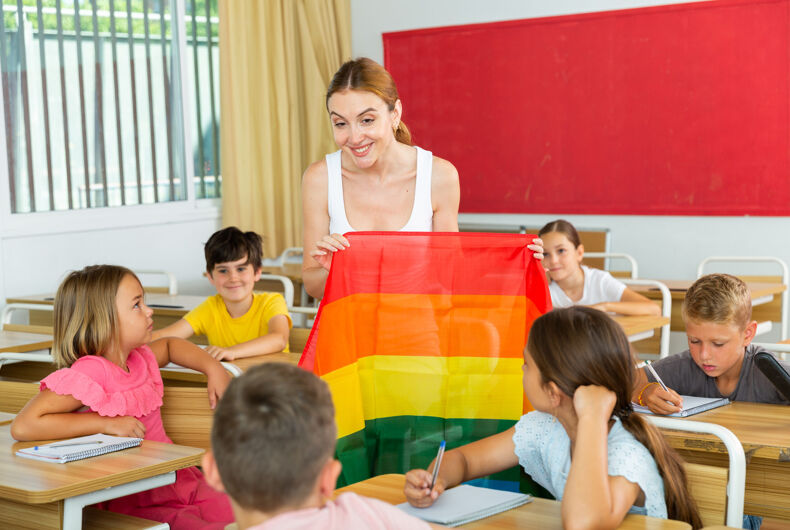 A Utah school district is banning Pride flags under the guise of a state-mandated policy that requires districts to keep classrooms “politically neutral.”

Despite the fact that the Utah state Department of Education doesn’t specifically consider Pride flags or rainbow symbols to be political, and the fact that no known incidents involving a Pride flag or rainbow symbol could be pointed to, the Davis School District is claiming that it is “required” to ban Pride flags along with Black Lives Matter, “Make America Great Again,” and other flags, stickers or symbols of a “political” nature.

“No flags fly in our schools except for the flag of the United States of America,” district spokesperson Chris Williams tried to tell the Salt Lake Tribune. The Tribune then noted that Williams “later clarified that some schools have flags from sports team or international countries” that the district considers “unrelated to politics” — but Pride flags are not considered among them.

The district slipped the Pride flag in their updated ban on political symbols because it had become “politically charged,” Williams claimed.

But they did not expect the pro-Trump motto “Make America Great Again” to be included in the ban.

Earlier this month, Cline was censured for promising to “make some phone calls” in a social media post after seeing a photo of a sign at a seminary welcoming LGBTQ people near Layton High School, which the state Board of Education determined had “incited hate speech.” Now Cline is labelling her social media posts as “[Not official USBE Board position].” She shared a similar post with the news of Davis’s ban.

Similarly, LGBTQ advocates have disavowed Davis for the politicizing and removal of the Pride flag. Amanda Darrow, the youth, family and education director at the Utah Pride Center, told the Tribune that this decision only harms students in and out the classroom.

“These people who want to remove the flag, they don’t understand what it means to us. That flag represents love and acceptance,” she said.

Williams and the district justify the decision as enforcement of a rule that’s been in place for years in accordance with state guidance, even though the Utah Board of Education said in a statement, “There is nothing in code that specifically defines a rainbow flag as a political statement so it would be up to district or charter school policies to make that determination.”

By contrast, Salt Lake City schools don’t ban Pride flags under such a policy. This notably includes Rose Park Elementary School, which has included Pride flags in their repertoire of flags for years since the principal met a trans student there. The school’s atrium had at least one flag representing the identity of students attending the school, totalling to about 41 flags.

The last two superintendents of Salt Lake City have held that a Pride flag isn’t political and denied requests to remove it, the Tribune reports.

When KUTV‘s Mark Woodruff pressed Williams about teachers that previously had Pride flags in their classroom, asking if they would be instructed to take them down or whether there had been any issues directly with them, Williams skirted from a direct answer on behalf of the district. He claimed it “doesn’t necessarily matter if the flag had flown before.”

He concluded, “We have to have a politically neutral classroom, and we’re going to educate the students in the best possible way that we can.”

The ACLU of Utah, among others, are also condemning the Davis School District.

“Whether or not a school district has the legal ability to ban inclusive and supportive symbols from classrooms, it is bad policy for them to do so,” the advocacy organization said in a statement. “Utah schools have an obligation to ensure that all students, regardless of their sexual orientation or gender identify, feel welcome inside a classroom. We urge school administrators and teachers to adopt policies that make all students feel safe and included.”

The leading cause for death amongst youth in Utah has been suicide for years, and in 2020, was the second-leading cause of death among all Utahns. As Davis’s homepage notes, September is National Suicide Prevention Awareness Month.

In April, high schoolers in Utah’s Ridgeline High School were captured on video cutting down an LGBTQ pride flag while classmates laughed and cheered.

This is why the number 1 killer of Utah kids is suicide, especially among LGBTQ youth. Nearly 52% say they have frequent suicidal ideation.https://t.co/twSZwWvWVl

I'm angry about this. Just last week I got a response from the Davis School District policy lawyer that lied! They intended the pride flag and any rainbows to be removed and just added MAGNA and BLM flags to make it look like less of an attack. #Mormon #utpol #LGBTQIA https://t.co/uWRodRqAxz

A Utah school district has long banned Pride flags from classrooms saying they are too political. Fact: Pride flags are "political" only in the sense that there are way too many people still trying to deny basic rights to LGBTQ people. That's it.

Davis school district should have just come right out and said, “we value the safety and feelings of our white straight students over all other students.” It’d have been a shorter article. https://t.co/O5N7ePQOXm

This SHIT makes me so angry. I’m so fucking tired of being embarrassed by my roots.