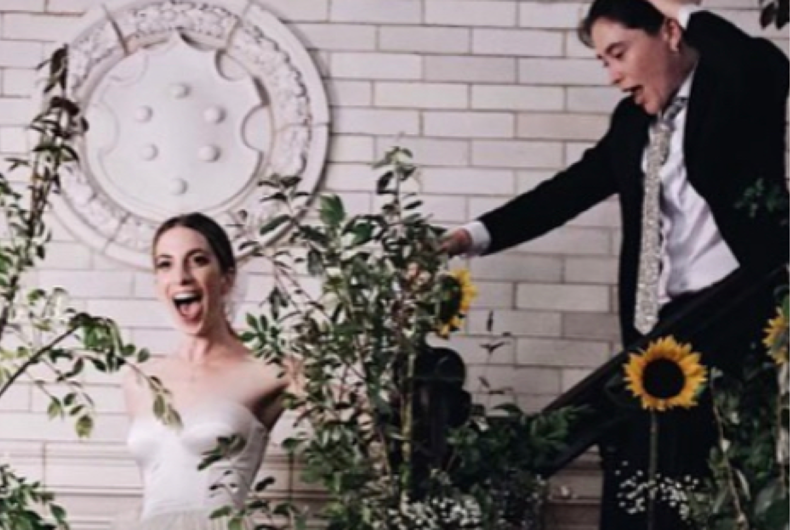 Out pansexual actress Molly Bernard, who has most recently starred in the shows Younger and Chicago Med, married her girlfriend Hannah Lieberman after almost two years of engagement.

“WIVES! Perfect day, perfect party,” Bernard wrote on Instagram. “WHAT A SURREAL JOY TO BE MARRIED TO MY TREASURE!”

Bernard, 33, first came out in 2017 in an interview with Entertainment Tonight, saying “It would be perfectly possible and wonderful” for her “to have a [relationship with a] woman or trans person.”

“I’ve always felt this way, but now it’s part of the conversation, we can talk about it,” she said at the time. “There’s language for it.”

She has acted professionally for over 20 years, with her first billed role coming with the film Pay It Forward in 2000 starring Kevin Spacey, Helen Hunt, and Haley Joel Osment.

Since then, she’s appeared in the films The Intern, Otherhood, Sully, and Milkwater. She joined the cast of the show Younger alongside Hilary Duff, Debi Mazar, Miriam Shor, and Nico Tortorella in 2015. She originally appeared in a recurring role but became a main cast member in the second season, and starred on the show until it concluded in June 2021.

She also starred in the show Transparent, centering around a trans woman transitioning after parenthood, as a younger version of Judith Light’s character Shelly Pfefferman, from 2016 to 2017.

Currently, she stars in a recurring role on the NBC drama Chicago Med.

Lieberman is a criminal attorney and youth advocate that has worked with the Bronx Defenders Program.

The two began dating and became engaged in January 2020. Together, the couple takes care of their dog, Henry.

“We said YES!” Bernard gushed at the time.

They had their ceremony at The Boathouse in Prospect Park, Brooklyn.