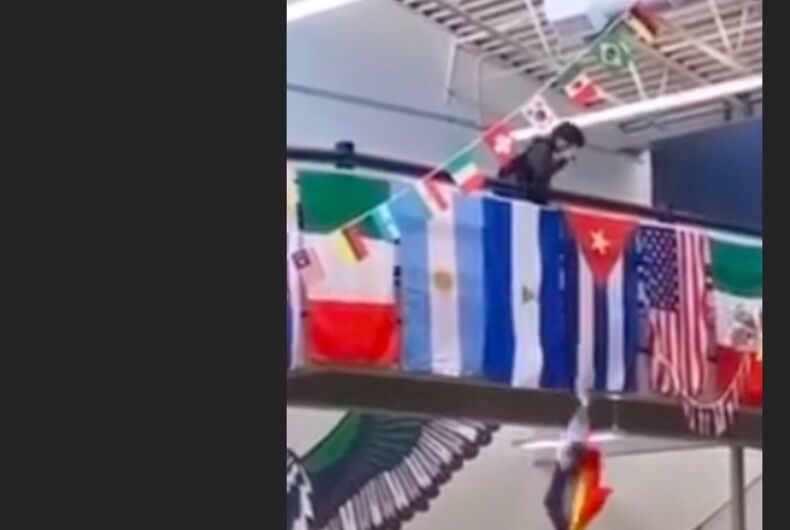 Screenshot from a viral video in which a student at Ridgeline High School in Millville, Utah cuts down a Pride flag.Photo: Screenshot

A student at Millville, Utah’s Ridgeline High School was captured on video cutting down an LGBTQ pride flag while classmates laughed and cheered.

The video shows the student standing above a row of flags from different countries and methodically working to cut down the Pride flag, which had been hung temporarily to honor an upcoming event that involved gay-straight alliance clubs from multiple schools meeting at Ridgeline. What’s more, this happened during the school’s Diversity Week.

Related: Gay teen’s family sues the school where he was relentlessly bullied before he died

As the student cut the flag, classmates can be heard in the background squealing with delight and urging the student to “hurry the fuck up.” Once the flag was untied, an eruption of cheers and applause flooded the room as it fell to the ground.

This is disgusting and heartbreaking. The amount of kids cheering when the Pride flag gets cut down is sickening. Embarrassing moment for Utahns and Ridgeline High School. Be better. 🏳️‍🌈🏳️‍⚧️ #ridgelinehighschool pic.twitter.com/zD1zrr7ZuD

The video soon circulated on social media, and the school is now facing criticism for not doing enough to keep its LGBTQ students safe or to successfully promote diversity.

Commenters on the school’s Facebook page called the video “nasty,” “shameful,” and “sickening.”

“Don’t pat yourselves on the back for simply instituting a ‘diversity week,”’ one person wrote. “When the students participating in it have zero understanding of what it means to respect diversity.”

“The students who took videos of the pride flag being cut down while they laughed and encouraged the student doing it, have not learned anything during this week. My heart hurts for the members of the student body and faculty who feel unsafe and ridiculed in your school.”

Former teacher Susie Augenstein told the Salt Lake Tribune that an LGBTQ student confided in her after the incident and said, “This felt like a direct message that our student body does not support or respect us.”

In an email to the Herald Journal, another student wrote:

“I feel attacked, and I know others do too. Today at Ridgeline High School someone was fixing a pride flag that had been flipped over. Some kids started booing when they did this. Another student was trying to keep them from fixing the flag. Then another student came and cut it off …”

A statement from the Cache County School District condemned the incident:

“Neither the school nor the school district condones the insensitive and disrespectful removal of the flag, which was done without permission. In fact, this took place during Ridgeline’s Diversity Week, which is held with the intention to create awareness and celebrate the diversity of students, as well as increase inclusion among the Ridgeline student body.”

“This type of incident reminds us of the importance of continually educating students, not just during a Diversity Week, on the importance of respecting one another and the right to attend school, participate in events, and learn in a safe and respectful school environment.”

The school has not commented on whether the student responsible will see any consequences.

Odessa Kelly could be the next out member of Congress. She’ll need to defeat a Democrat to do it.