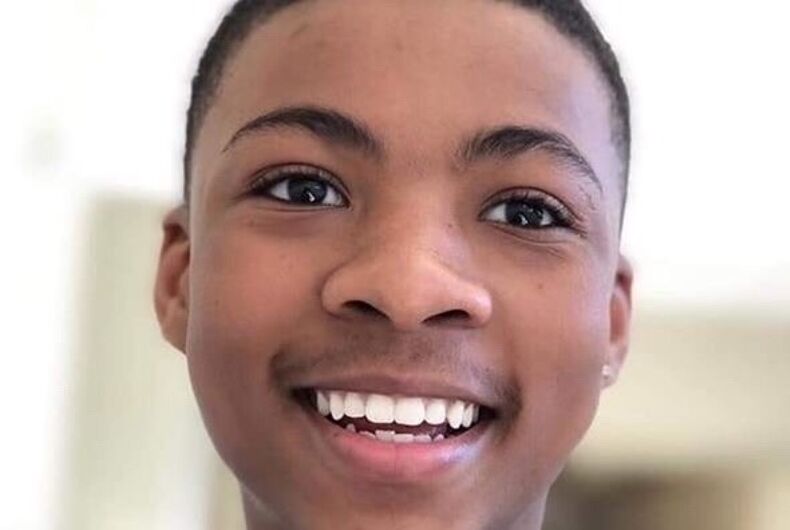 The family of Nigel Shelby announced today that they have filed a lawsuit against the Huntsville City Schools for civil rights violations and wrongful death.

Shelby had only attended Huntsville High School for under a year when he took his own life on April 18, 2019.

Related: Most young people would support a friend who came out as transgender

“Nigel Shelby was bullied by his peers for his race and sexual orientation, and when he sought help from school administrators, was told that his sexuality was his choice,” the news release recounted.

“School administrators did not alert Nigel’s parents of his struggles in school so that he could receive help from a licensed mental health professional. On April 18, 2019, Nigel Shelby died by suicide.

“Following his death, school administrators alerted Nigel’s mother to look for a suicide note in his backpack, revealing that they were aware of his plans to take his own life.”

The District announced that it had been notified of pending litigation last month, and did not comment on legal proceedings. They did want to “remind students, families, and staff members of the longstanding resources in place to support students,” though, they said in a statement. They also tout a “strong Gay-Straight Alliance” and partnerships with GLSEN and the Anti-Defamation League (ADL).

Since her son’s death, Camika Shelby has spoken out against anti-LGBTQ bullying in schools and intolerance at home.

“I know there are a lot of parents in this world who have a problem with accepting who their kids are,” she said to a crowd of students in 2019. “And if you come from that type of family, I want you to know that it’s OK. Sometimes your family can be your own worst enemy.”

After Shelby’s death, the Huntsville community and LGBTQ advocates rallied to raise funds for his funeral, organizing a GoFundMe page and a Drag Brunch to raise over $15,000.

MEDIA ALERT: Due to bullying by peers about race & sexual orientation, 14yo Nigel Shelby died by suicide in 2019. School admin were aware of his plans, but didn’t alert Nigel’s parents. @AttorneyCrump & counsels to hold news conference 4/13 at 10AM CT announcing a lawsuit. pic.twitter.com/YTJ4fNg0y9

April 18 will mark two years since Nigel Shelby died of suicide in Huntsville, Ala because his family said he was bullied for being gay. He was 15. He would have been 17 Feb. 1, 2021.