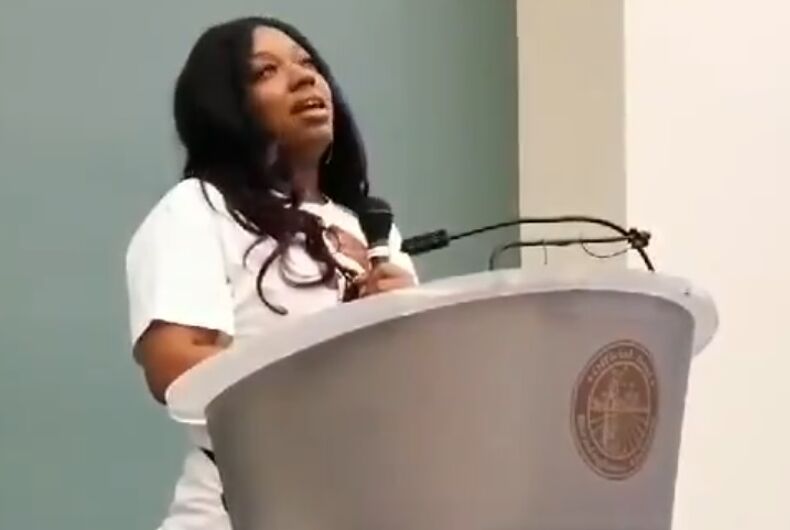 Camika Shelby, the mother of 15-year-old Nigel Shelby who died of suicide this past April after being bullied for being gay, delivered a powerful speech about accepting LGBTQ youth.

Related: Oprah explores a mother’s love and struggle to accept her gay son

Shelby was the main speaker at an event for black LGBTQ youth in Birmingham, Alabama.

In her speech, she talked about her relationship with her son. Even though other boys his age were interested in sports, she reminisced, Nigel cared more about Beyonce.

“Growing up was hard for him. People didn’t really accept him, but I always knew who my baby was.”

She said she first talked to him about sexuality when he was around eight or nine-years-old. “I already knew,” she said, and she wanted to help him accept himself.

That worked – at age 13, he was ready to come out to her and told her that he was attracted to boys.

She then addressed her audience’s experiences.

“I know there are a lot of parents in this world who have a problem with accepting who their kids are,” she said. “And if you come from that type of family, I want you to know that it’s OK. Sometimes your family can be your own worst enemy.”

Shelby said that she still cries because she feels like she wasn’t able to do enough to help her son, and she told the audience to seek help if they are considering hurting themselves.

But she said that she realized this his life had a purpose, and now she is that purpose.

Camika Shelby message to LGBTQ youth who are not accepted by family: "If they don't love you for who you are, they don't deserve you." Nigel was Camika's only child. She knew her son had a purpose. This was it: for her to be a mother to other LGBTQ teens (warning: get tissues)😭 pic.twitter.com/qY0u8jVrYW

All you want for Christmas in 2019 is Ellen