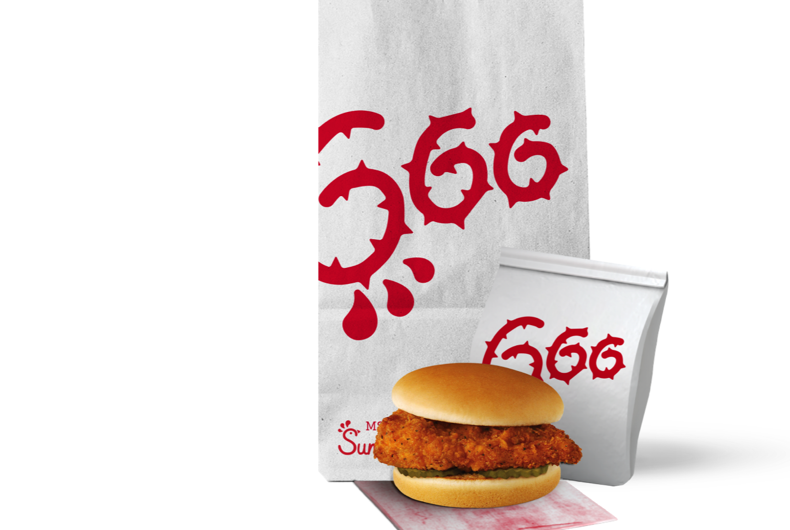 Chick-fil-A will be available on Sundays starting this weekend. Chick-fil-A themselves just didn’t know it.

The collective MSCHF, which partnered with out rapper Lil Nas X on his infamous “Satan Shoes” deal, is not only planning to work around the anti-LGBTQ food chain’s famed “closed on Sundays” pledge, but they’re going to give their product a Satanic makeover. Literally.

Related: No one wants to work for Chick-fil-A. They can’t figure out why.

Online today, MSCHF has unveiled MSCHF Drop #55, which is their planned “Sunday Service,” intentionally alluding to the name of weekly Christian religious observation and celebration, just as musician Kanye West has.

MSCHF’s Sunday Service though won’t have gospel music, choruses, or giant stadiums of people surrounding it, as West’s rendition entails. This Sunday Service won’t have any Christian worshipping either. It will have Chick-fil-A, though.

The collective isn’t giving away all the details, but they pledge to deliver “not-so-fresh” and “limited” supply of Chick-fil-A product to willing customers starting this Sunday, September 26, in New York City. The sandwich will be available for $6.66.

MSCHF, whose only public direction to fans on social media is “don’t follow us,” shared what the delivery orders will look like. It’s safe to say that S. Truett Cathy — the late, and very religious, founder of the chain — his son Cathy — who has been the CEO — and the rest of Chick-fil-A’s executives wouldn’t approve of it.

The collective typically offers their unique, and controversial, products through their mobile apps, but they’ve also launched a website dedicated solely to explaining MSCHF Sunday Service and taking orders, mschfsundayservice.com.

The first question visitors are asked on the website is “Should Chick-fil-A serve on Sunday?” The page is designed in classic Chick-fil-A red and white colors.

Visitors are then given the option to completely endorse the idea and say “HELL YES!” or to feign disapproval of it and click, “GOD NOOOOOOO!”

Both will result in you being redirected to the next page, but clicking either option results in the page flashing black and red, only showing the numbers “666” (“the number of the beast” according to the Bible and associated with Satan), a Chick-fil-A sandwich and MSCHF’s redesigned Chick-fil-A packaging with it.

Then they invite visitors to “Get A Sandwich” — sign up anytime, and MSCHF will send “first come, first serve” links allowing prospective customers within their delivery radius (again, in NYC) to complete their purchase on the 26th. Then they’ll get their sandwiches delivered while MSCHF has the supplies.

MSCHF likely did not let Chick-fil-A in on their plans ahead of today, but they have no issue with them finding out — they encourage visitors to tweet the chain and say, “Thank you @satan for @mschf misappropriating @ChickfilA on the Lord’s Day!”

“Certain American values go hand in hand,” MSCHF states in a manifesto on the website. “For example, conservative Christianity pairs perfectly with a correspondingly devout faith in the ‘free market.’ That being the case, fuck it, let’s take advantage of the obvious hole in the market left by notoriously Christian restaurant chain Chik-fil-A’s sabbatarianism.”

They conclude, “‘The market finds a way,’ and, in this case, it’s the road to hell. Hail Satan and Eat Mor Chikin on holy days.”

MSCHF also appends the Bible verse for Colossians 2:16, reading, “THEREFORE LET NO ONE PASS JUDGEMENT ON YOU IN QUESTIONS OF FOOD AND DRINK, OR WITH REGARD TO THE SABBATH.”

The chain has yet to officially respond, but you can predict one in the coming days.

On Friday, current CEO Dan Cathy announced that he’s stepping down in November to allow his son, Andrew Truett Cathy, to take over.

Cathy, 68, once proudly proclaimed that the chain was “guilty as charged” when it came to opposing marriage equality because Chick-fil-A wants to promote “the biblical definition of the family unit.” After their history of donating to anti-LGBTQ organizations came to light, the company has tried to cast a PR illusion by pledging not to be anti-LGBTQ with their donations anymore, just to be caught doing it again in the years since, including last year.

Dan, one of the heirs to the Chick-fil-A fortune with an estimated net worth of $8 billion, was just caught in June giving money to organizations that are working to pass anti-trans laws in dozens of states this year and blocking the Equality Act in Congress.

He took over command of the company in 2013, after being named president and COO in 2001, and he’ll remain chairman of the Chick-fil-A board after Andrew follows in his footsteps.

Apparently Buckingham Palace used to be an old cruising site?