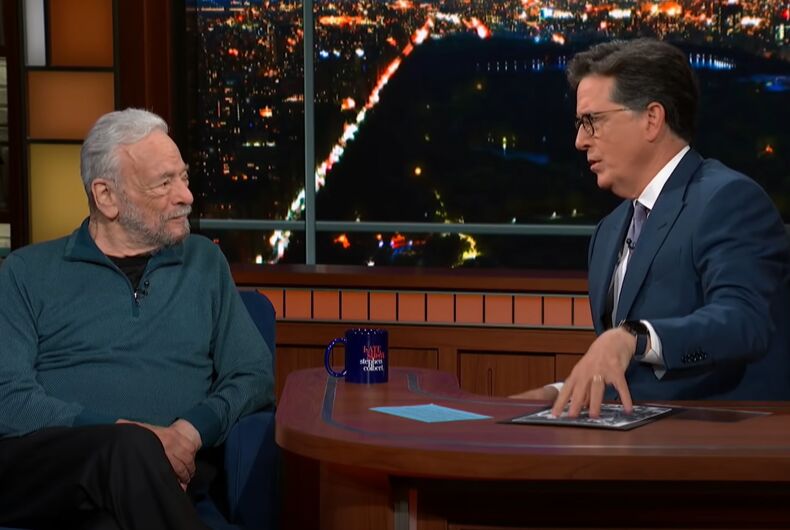 Meeting of the Stephens: Sondheim tells Colbert about his next project.Photo: Screenshot

At 91, legendary gay composer and lyricist Stephen Sondheim is working on a new musical.

“I’ve been working on a show for a couple of years with playwright David Ives and it’s called Square One,” he said on The Late Show with Stephen Colbert. “We had a reading of it last week and we were encouraged so we’re going to go ahead with it. With any luck we’ll get it on next season.”

Nathan Lane said on The Today Show this week that he and Bernadette Peters took part in the reading, and that he’d love to return to Broadway.

“It was very exciting,” Lane told Hoda Kotb and Jenna Bush Hager. “Bernadette Peters and I. A whole group of wonderful people.”

Sondheim’s musicals include West Side Story; Sunday in the Park with George; Sweeney Todd; Into the Woods; A Little Night Music, and many others. Colbert introduced him as “the greatest composer and lyricist in the history of the American theater.”

Ives’ previous work has included both one-act plays and full-length plays, including Canvas, All in the Timing, and Words, Words, Words. He helped rework the book for the 2002 Broadway version of the musical Dance of the Vampires and co-wrote the book for Irving Berlin’s White Christmas, which premiered in San Francisco in 2004 and had a limited engagement on Broadway.

Ives and Sondheim previously worked together on a show that was based on two films by Luis Buñuel and was originally set to premiere in 2017 but later cancelled. There has been some speculation that Square One could be an outgrowth of that collaboration.

A gender-swapping revival of Company, the 1970 musical by Sondheim and George Furth, is opening in New York this fall, with Marianne Elliott as the director and a woman playing the role of Bobby, now Bobbie.

The show had a week of previews in New York before the COVID-19 pandemic shut down Broadway and is finally resuming with previews on November 15 at the Bernard B. Jacobs Theatre. Katrina Lenk plays Bobbie and Patti Lupone plays Joanne in the revival, which officially opens December 20.

Sondheim also told Colbert that he’s pleased with Steven Spielberg’s new film version of West Side Story, the 1957 musical for which he wrote the lyrics and Leonard Bernstein composed the music. A trailer was released this week for the film, which 20th Century Studios has scheduled for December.

“It’s really terrific,” Sondheim said. “For those of you who know the show, there are going to be some real surprises in it because Tony Kushner, who wrote the screenplay, has done some really imaginative and surprising things with the way the songs are used in the story.”

“The whole thing has real sparkle to it and real energy and it feels fresh,” Sondheim said. “It’s really first rate. Movie musicals are hard to do and this one, Spielberg and Kushner really nailed it.”