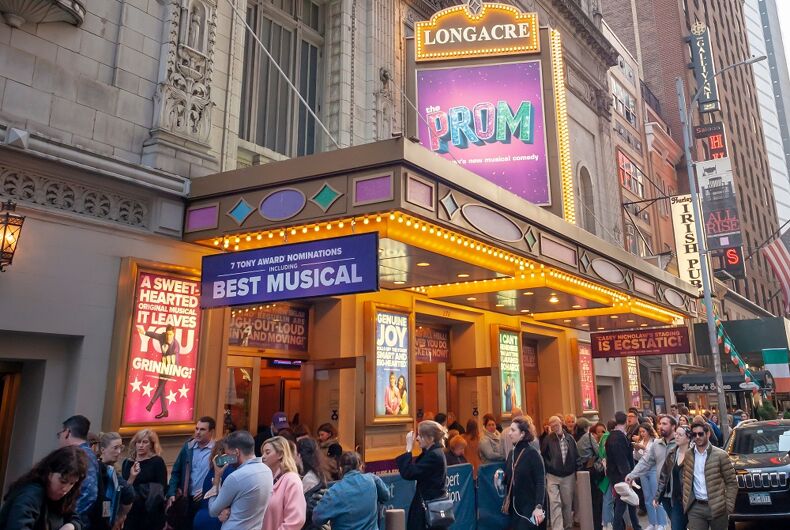 April 30, 2019 Throngs of theatergoers descend on the Longacre Theatre on Broadway in New York to see a performance of the musical "The Prom."Photo: Shutterstock

A Broadway audience cheered as two women got married on stage at the end of a lesbian-themed musical.

Armelle Kay Harper is the script coordinator for The Prom, a Tony-nominated musical about a high school lesbian couple going to prom in a conservative town.

Two years ago, she met actress Jody Kay Smith (she isn’t involved in The Prom) on an app. After 20 minutes of chatting they decided to meet up.

“We’re both really witty people, and it’s hard to find someone who can keep up,” Harper told the New York Times. “But she really got me, and she made me laugh. Plus those blue eyes. What can you do? Gorgeous.”

They quickly fell in love, surprising even their friends.

“They’re almost like an old married couple already, and they’re not old,” said Haley Tynes, who was the maid of honor at the wedding.

And they weren’t married until curtain call at this past Saturday’s performance of The Prom.

After the show, the women went on stage and were married by one of the show’s writers, Bob Martin. He was ordained online and married the couple.

The audience cheered as the women were married.

today ended up not great but at least i witnessed a surprise wedding between two women at the prom musical pic.twitter.com/CaQhzrrsCW

The couple plans to have a bigger ceremony next month.

Harper said that the musical is a rare, affirming lesbian story, the perfect place for her to get married.

“There are so many shows where lesbians are secondary characters or the butt of the joke,” she said. “We all love Fun Home, but it’s a drama. So The Prom is really unique in that it’s a celebration, and it’s funny without being at the expense of lesbians.”

Coke released some cute gay ads. Now the right is calling for a boycott.