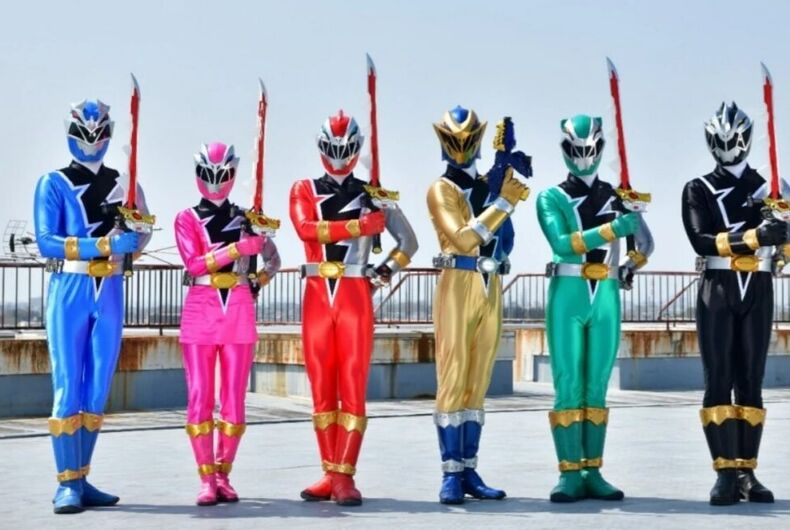 Power Rangers Dino Fury has made franchise history by introducing the first Ranger who is unabashedly out as a member of the LGBTQ community. Green Ranger Izzy Garcia is shown holding her girlfriend’s hand in an upcoming episode that has already been shown in France.

Fans quickly reacted to the news online as they celebrated the inclusion of a queer character into the franchise.

A clip from the episode shows the other characters finding out that their fellow Ranger is gay when she walks off holding her girlfriend’s hand. There is no big coming out scene; being queer is just presented as a normal aspect of her life.

And fans quickly jumped on the opportunity to feel seen by the series and reflect their own lives.

Executive producer Simon Bennett replied back to all the fans enthused about the big moment with his own message of support and excitement.

“Very happy with the reaction to Power Rangers #dinofury episode 13, which has just aired in France,” Bennett tweeted. “Really looking forward to when it is available in the US, and I can jump into discussions.”

And when one user tried to yuck everyone’s yum, saying it was too late for excitement when it should have been standard practice years ago, they got a response directly from Bennett.

“It’s honestly sad to see in my opinion. This shouldn’t just be some marketing ploy,” Victor tweeted.

“I assure you, it was no marketing ploy,” Bennett replied. “And yes, we’ll [sic] overdue.”

This isn’t the first LGBTQ representation in the Power Rangers franchise. During the second act of the 2017 Power Rangers movie, Yellow Ranger Trini Kwan, played by Becky G, is shown struggling to accept her sexual orientation.

A character assumes she is having “boyfriend troubles,” before realizing that maybe she is actually having “girlfriend troubles” in a scene director Dean Israelite called a “pivotal” moment in the film.

“For Trini, really she’s questioning a lot about who she is,” Israelite said at the time. “She hasn’t fully figured it out yet. I think what’s great about that scene and what that scene propels for the rest of the movie is, ‘That’s OK.’ The movie is saying, ‘That’s OK,’ and all of the kids have to own who they are and find their tribe.”

LGBTQ representation on the screen has lagged behind comics. Characters like Wonder Woman, Catwoman, Batwoman, Harley Quinn, Deadpool, Northstar, and Ice Man have all been shown to be LGBTQ on the page, but not as much on the big onscreen.

Very happy with the reaction to Power Rangers #dinofury episode 13, which has just aired in France. Really looking forward to when it is available in the US, and I can jump into discussions.

I’m literally crying and I haven’t even seen the episode! 🏳️‍🌈

I assure you, it was no marketing ploy. And yes, we’ll overdue.

Howard Stern just said what everyone is thinking about unvaccinated people