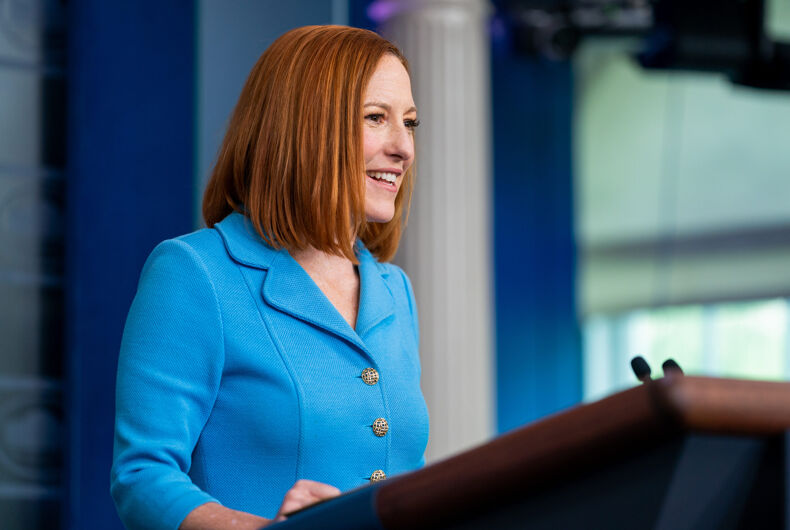 White House Press Secretary Jen Psaki’s job involves talking. A lot of talking. So it’s not surprising that every now and then she’s going to have a slip of the tongue.

One of those mistakes happened on August 25, when Psaki accidentally said “plandemic” instead of “pandemic” when talking about what President Joe Biden will be discussing during his meeting with Israeli Prime Minister Naftali Bennett.

The mistake didn’t get much coverage in the media because it was clearly just an error and most people wouldn’t think it’s important, but this week the slip has gotten a lot of attention from the online right.

“She said it lol,” wrote @ArtValley818_, a conservative Twitter user with a large following, posting the clip of Psaki’s mistake, edited to make it appear more significant than it was.

She said it lol pic.twitter.com/Z2DwKkgS8U

Their tweet of the video – which is currently the pinned tweet on their account – started a conversation among people who believe, apparently in earnest, that it was actually a Freudian slip. That is, that Psaki accidentally told the truth that the COVID-19 pandemic was planned in advance.

They don't lie, they always say what they are doing. People need to understand this

How long until people pretend this is edited, or that she didn't really mean it?

The people will still not get it

Can’t even keep up with their lies lol

They finally admit it!! 🙄 We knew it wz an orchestrated plan all along 😒

‘Our efforts to address THE GLOBAL PLANDEMIC’ ~ Jen Psaki https://t.co/F4m3XLPDZG

Someone even complained that the official transcript of the briefing edited out her error… because even copy editors are part of the conspiracy.

It's already edited in the White House "transcript"https://t.co/lkHdoHX4E7

Psaki’s slip has been getting mentioned out of the comments on the original post.

And I, myself, am losing count on the number of times I have heard Jen Psaki call it a "plandemic". So either it is a Freudian slip and she believes it or she is misleading others to believe it. In either event it is conspiratorial. https://t.co/1BC7ejRLVa

“We expect their conversation to cover a range of topics from Covid-19 to addressing the Global Plandemic.”

Office of the Director of National Intelligence said in a statement in April that “the Intelligence Community also concurs with the wide scientific consensus that the COVID-19 virus was not manmade or genetically modified.” While the Biden administration has called for an investigation into the possibility that the virus was leaked from a lab that was studying coronaviruses, that’s far from saying that there was a global conspiracy to engineer the entire pandemic before it happened.

And there is no evidence that Psaki herself was involved in any such conspiracy.

The COVID-19 pandemic has been the subject of numerous conspiracy theories, with or without Jen Psaki saying one syllable incorrectly as she spends hours each day talking with the press. But this one video clip could be cited by the online right for months to come.