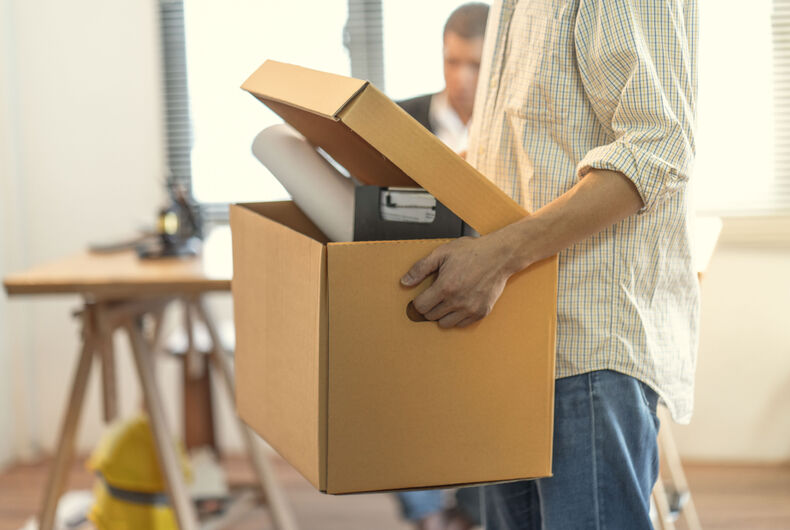 A teacher in Missouri resigned after he was told to sign a letter stating that he would not tell students that he’s gay.

John Wallis, 22, was hired this year to teach speech and theater at Neosho Junior High School in St. Louis, his first job after graduating from college. He put up a sign that said “In this classroom everyone is welcome” in his classroom and had a flag on his bookshelf, and parents immediately started complaining.

Related: Students walk out of school in support of teacher put on leave for coming out

“A parent called last week to complain that I was going to teach their child to be gay,” he said in a Twitter thread about the ordeal. He said that another parent compared the rainbow flag to the Confederate flag.

He said that students asked him why he had the sign and the flag up, and he said it’s because he’s gay.

“This led to three or more calls from parents accusing me of pushing my agenda in the classroom,” he said.

That’s when, Wallis said, Superintendent Jim Cummins sent him a letter to sign that said he wouldn’t come out to students. According to a copy of the letter obtained by the Springfield News-Leader, Cummins wrote that Wallis would be fired if he couldn’t keep his “personal agenda on sexuality out of your narrative and the classroom discussions.”

The letter listed several things Wallis wasn’t allowed to do.

There will be no references to sexuality or gender displayed in your classroom;

Your instruction and classroom conversations will stay clear of discussions regarding human sexuality and/or sexual preference; and

Any research or assignments given should not require a topic related to the above.

Wallis said that he refused to sign the letter and resigned on September 1, a few weeks after the school year started.

Cummins confirmed that a letter was sent and said that it was intended to “document” a conversation he had with Wallis on August 31. He also confirmed that Wallis resigned.

Wallis has filed a complaint with the U.S. Department of Education’s Office of Civil Rights, and a federal complaint may be his only recourse. The school district’s anti-discrimination policy does not include sexual orientation and gender identity, and the state of Missouri doesn’t ban anti-LGBTQ discrimination.

“There is never a problem when a heterosexual teacher displays pictures of themselves and their spouses in a classroom but I have a flag and all hell breaks loose,” Wallis wrote. “My administrators chose to believe the bigotry of parents over their building’s teacher. To say I am devastated is an understatement.”

Missouri Rep. Crystal Quade (D) said that Wallis’s story highlights the need to pass the Missouri Nondiscrimination Act, which would ban anti-LGBTQ discrimination. Democrats have filed the bill every year since 1998 but it has not passed.

.@MrJWallis, thank you for your dedication to our kids. I am ashamed this happened and continues to happen in our state. You- and our kids- deserve better. #MOleg needs to be on the right side of history. MONA must become law and we must start putting ALL of our kids first. https://t.co/3vEj0KPeWV

Want to know how to raise thriving kids? Follow the stories of these amazing LGBTQ parents.