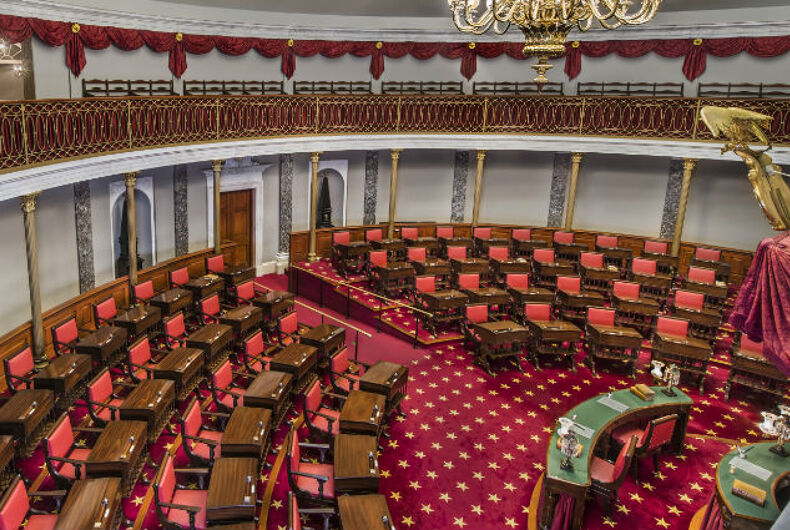 If you think the current crop of Republicans in the Senate is bad, wait until you see what’s waiting in the wings.

As Republicans set their sights on Senate seats in next year’s mid-term elections, a clear pattern is emerging among the GOP candidates: They want to mimic Donald Trump as much as possible (at least politically), right down to his pungent for authoritarianism. That’s an ominous sign for democracy.

Republican Senators in five states are retiring next year: Ohio, North Carolina, Missouri, Pennsylvania and Alabama. Their would-be replacements are tripping all over themselves to prove their cult-like loyalty to Trump.

Perhaps the most moderate of the bunch is Sen. Rob Portman (R-OH), an early supporter of marriage equality and the Employment Nondiscrimination Act (ENDA). Portman voted to acquit Trump in both impeachments. Yet, he also undercut his support for LGBTQ rights by consistently backing Trump’s far-right judicial nominees and supporting Trump 88 percent of the time. No wonder the Human Rights Campaign (HRC) gave him a zero rating in the previous session of Congress.

But in the eyes of the right, all five of the Senators committed the now unpardonable sin of voting to certify Joe Biden as the winner of the Presidential election in the Electoral College, rejecting Trump’s endless lies about a stolen election.

Blunt’s statement about the election results is a huge contrast with that of Trump’s biggest supporters in the Senate, such as Blunt’s colleague Sen. Josh Hawley (R-MO). Blunt said the president hadn’t proved his case and “as such, Congress has a constitutional obligation to accept the election results.” Hawley led the challenge to the certification of Biden’s victory.

Even after the insurrection at the Capitol — prior to which Hawley was photographed giving Trump supporters a raised fist in solidarity — Hawley insisted on plowing ahead with the challenge on the grounds that “it’s very vital.”

The candidates seeking to hold the seats for Republicans are much more aligned with people like Hawley. In fact, they explicitly reject the increasingly rare kind of deal making that gets things done in the Senate.

“Roy [Blunt] is a super-super insider and that’s not what the base wants,” former Missouri state Sen. John Lamping (R) told Politico. “No one is running to be a Roy Blunt senator. They’re running to be a Donald Trump senator. If somebody becomes a serious threat, they’ll be accused by their opponents of being more like Roy Blunt.”

Indeed, the candidates are as much focused on the GOP’s leadership as they are on Democrats. Senate Minority Leader Mitch McConnell (R) is a particular target, with encouragement from Trump.

Trump recently complained that Sen. Shelby is a “Republican in name only,” or RINO, because he’s not backing Trump’s choice for his replacement, Rep. Mo Brooks (R-MO), who spoke at the rally preceding the Capitol insurrection. In going after Shelby, Trump also declared war on McConnell.

“I see that the RINO Senator from Alabama, close friend of Old Crow Mitch McConnell, Richard Shelby, is pushing hard to have his ‘assistant’ fight the great Mo Brooks for his Senate seat,” Trump said in a recent written statement.

The implications of a Trump-ier Senate are hard to minimize. For one thing, Trumpists will have no interest in the compromises necessary to get many bills passed. For them, the Senate is going to be a giant Fox News set, where they all play Tucker Carlson. All they will care about is playing to the base and fanning the culture wars.

That will be bad news for LGBTQ rights, especially if Republicans take control of the Senate. You can expect all kinds of hateful legislation aimed at the community, particularly the trans community.

But the picture is much bleaker than just that. All of these candidates give every indication that they will gladly overturn elections results that they don’t like — just as Trump would want them to. That’s especially true if Trump runs again in 2024 and loses again. No matter how wide the Democratic margin of victory is, Trumpists will declare it all a lie and demand that their candidate be installed.

Sounds far fetched? Eight Republicans Senators voted to overturn election results last January, and that was after the violent attack on the Capitol. Another half dozen who said they were going to only didn’t after they changed their minds.

There’s every reason to think that next time, the same group will be back, but with larger numbers, thanks to the new candidates. It’s another sign of just how authoritarian the GOP is becoming.