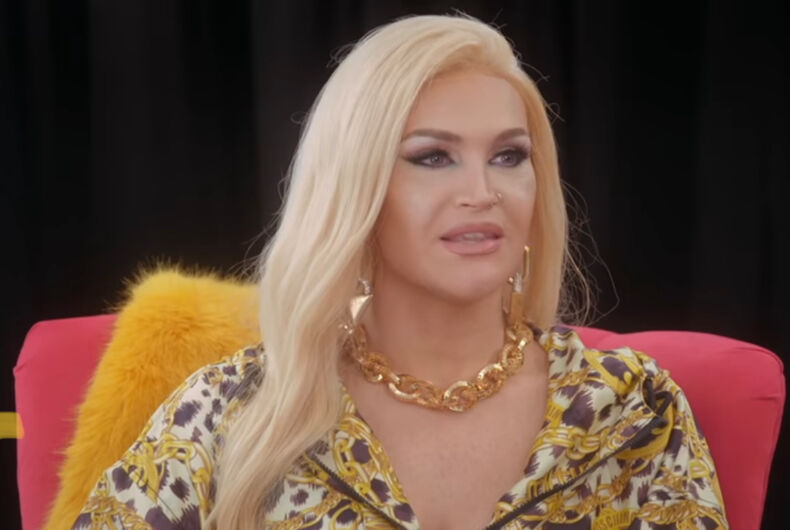 The winner of RuPaul’s Drag Race: All-Stars Season 6 was revealed when the season’s final episode aired on September 2. Kylie Sonique Love, a former competitor from the second season of the original RuPaul’s Drag Race series, was crowned the winner, making her the first out transgender competitor to win any edition of the legendary drag competition franchise.

In fitting fashion, of course, it was a very close competition, and it came down to a split-second move by Sonique that earned her the judges’ praise and ultimate success.

As recapped by our sister publication INTO, the episode begins with the Top 4 contestants — Sonique along with fellow Drag Race alumni Eureka, Ginger Minj, and Ra’Jah O’Hara — holding a party and reflecting on their journeys before preparing for the challenge of the episode, which was to add an original verse to RuPaul’s song “This is Our Country,” which they will perform in front of the judges. That’s right before there’s one final lip sync to determine the winner of the show.

Sonique decided to write her verse addressing the marginalization she’s endured in America as a trans woman.

Then the four contestants learn their choreography and then stop before the main showdown to appear on the podcast What’s the Tee? hosted by RuPaul and judge Michelle Visage.

“Once I transitioned, I realized who I am runs way deeper than the outside,” Sonique said during the podcast.

For the showdown, Sonique wore an American flag-style cocktail dress.

When it was her time to hit the stage for the lip sync challenge — using the song “Stupid Love” by Lady Gaga — Sonique puts on an amazing performance, right before she nearly falls flat on her face.

Nearly. Instead, in a split second she saves herself (and her performance) by turning the fall into a body roll, landing in a near-perfect pose.

Rajah’s reaction to Kylie’s stumble and save is killing me like did they not witness the same event we all did 😭 #AllStars6 pic.twitter.com/FKPxqoLXNr

Oh my GOD!!!! I slipped on my boa and my foot got caught in my dress, I seen everything going in slow motion and what learned in gymnastics was when you fall you roll out of it, and make it look good! I love y’all so much for the support I am honored to be your new queen! TBC 👑 https://t.co/WURcyyw3jb

From there, it was easy to declare her the winner.

“Kylie’s exhilarating blend of tenacity, vulnerability and talent made her a sizzling stand-out in the most compelling ‘All Stars’ in the franchise’s herstory,” RuPaul said in a statement following the episode’s premiere.

“Her trajectory from season two of ‘Drag Race’ to the winner of ‘All Stars 6’ is an inspiration to all who have had the privilege of sharing her amazing journey. All hail Queen Kylie!”

Condragulations to the newest member of the Hall of Fame and winner of #AllStars6! 👑 💋 We love you diva! ✨ pic.twitter.com/9LQJAFnPzl

She becomes the first trans woman to win in the history of the US franchise. 🏳️‍⚧️ pic.twitter.com/c3kumFy0tq

Sonique was a competitor on Season 2 of RuPaul’s Drag Race, where she was eliminated and finished in ninth place. When a reunion episode was held, Sonique came out as a trans woman publicly.

Sonique also previously competed in the holiday special RuPaul’s Drag Race: Holi-slay Spectacular, which she was declared co-winner, as were all of the participating contestants.

Her solo win makes her the second out trans contestant to win a rendition of the show in its global franchise’s history, and the first in the United States. Angele Anang was the winner of Drag Race Thailand in 2019.

“I’m so grateful to Paramount+, World of Wonder and RuPaul for taking everything she’s learned in the business and for giving people like me an opportunity,” Sonique said after her win. “Not just drag queens but trans people, and I’m so grateful to be the first trans representation with the crown.”

Kylie Sonique Love's arc on #AllStars6 is one of the most impressive full-circle success stories in Drag Race history. From 9th place to 1st, a star is born, baby! pic.twitter.com/RyVSabhYQn

How it started vs. how it's going, @xoSonique edition 👑✨ #AllStars6 pic.twitter.com/yC0cRaluCN

The GOP candidates running for the Senate don’t want to govern. They want to rule.