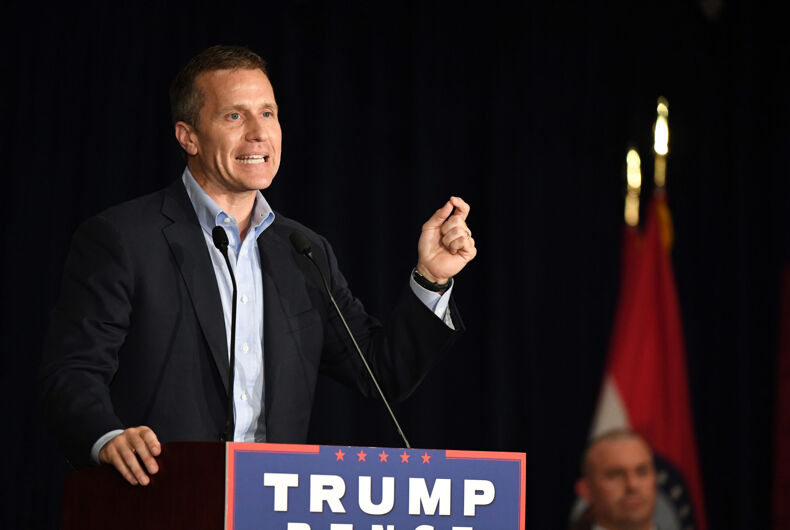 We just got through the 2020 election, but the recent rash of Senate Republicans retiring has already led to a land rush of candidates seeking to take their place.

But as dreadful a batch as the incumbents are, the candidates vying to replace them are even more dire.

Related: Democrats have a chance to pass the Equality Act but out Senator Kyrsten Sinema could screw it up

The retirees are a pretty mixed bunch at best. Shelby, Burr and Blunt are hard-core conservatives and dependably anti-LGBTQ.

Toomey and Portman have had moments of moderation amidst otherwise conservative records. Both voted for the ENDA, the precursor of the Equality Act, and Portman was one of the first Republicans to support marriage equality. Portman also voted consistently for Trump’s worst judicial nominees.

But still, their potential GOP replacements seem to have just as, if not more, terrible anti-LGBTQ records.

Consider current Rep. Mo Brooks (R-AL), who is running for Shelby’s seat. Brooks was one of the speakers at Trump’s Stop the Steal rally on January 6, which led to the insurrection at the U.S. Capitol. He told the crowd that that day was the one where “American patriots start taking down names and kicking ass.”

In a fit of gaslighting, Brooks subsequently blamed the riot on “antifa.”

Brooks launched his campaign with a long list of issues he vows to battle, including transgender rights.

Then there’s former Missouri Gov. Eric Greitens (R), who wants to replace Blunt. Greitens was forced to resign after admitting to an extramarital affair and being indicted on a felony invasion of privacy charge for allegedly using a nude photo of his mistress to blackmail her.

When he was running for governor, Greitens declared allowing transgender people to use the bathroom of the gender they identify with was an example of “obscene federal overreach.”

Brooks and Greitens prove the ongoing influence of Trumpism that remains in the Republican Party. The lesson that GOP candidates seem to have taken from Trump’s presidency is that you need to be as extreme and vicious as possible in order to win votes. (Never mind that Trump lost re-election.)

It’s frightening to consider the impact these kind of candidates could have if elected. But the very nature of those candidates are also a challenge to Republicans hoping to recover their Senate majority.

“You have candidates that want to keep re-litigating the past instead of litigating what Democrats are doing now — that is a very problematic approach for Republicans,” Jessica Taylor, who handicaps Senate races for the nonpartisan Cook Political Report, told the Washington Post.

Taylor adds, “you’re running against a unified Democratic control with history on your side for winning back seats, and they could very well squander that.”

In fact, Republicans have done just that in the past by fielding candidates who are at once crazy and extreme. They lost a sure-thing Senate race in Missouri in 2012 when candidate Todd Akin started sounding off about “legitimate rape.”

Then there was Christine O’Donnell, a 2010 Senate candidate from Delaware, who felt the need to run an ad in which she declared, “I am not a witch.”

More recently, Alabamans elected a Democrat to the Senate in 2017 for the first time in decades rather than send Roy Moore to Washington, who was twice removed from the Alabama Supreme Court for judicial misconduct.

Senate Minority Leader Mitch McConnell (R) has already indicated that he’s not looking for ideological purity. “My goal is, in every way possible, to have nominees representing the Republican Party who can win in November,” McConnell told Politico. “The only thing I care about is electability.”

Extreme nominees could bolster the Democrats’ hopes of holding onto the Senate. The more Republicans spend their time fighting among themselves over the party’s future, the bigger a toll it takes on their hopes.

In the meantime, though, we will have to live through a competition to see who is the Trumpiest nominee of all.