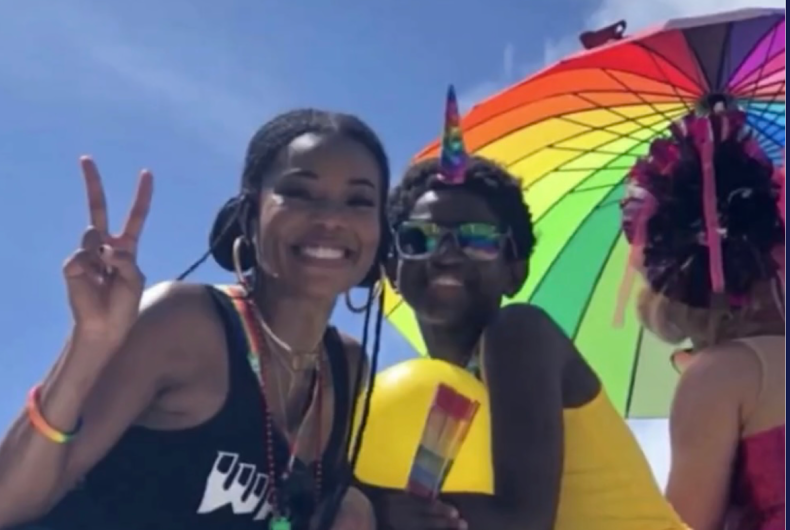 Gabrielle Union and Zaya Wade at Pride in 2019Photo: Screenshot/YouTube

Actress Gabrielle Union is currently sharing a lot about her personal life as her new book comes out. In You Got Anything Stronger? Union details several stories about her journey as a mother, stepmother, and wife to retired basketball star Dwyane Wade, as a follow-up to her first memoir We’re Going to Need More Wine.

One story that she’s sharing is how she took her 13-year-old trans stepdaughter, Zaya Wade, to Miami Beach Pride in 2019, which was Wade’s first time attending a Pride parade.

Union retells the story in a few interviews, but her sit-down with radio station Power 105.1‘s show host Angie Martinez has gone viral on social media. She also spoke with WLRN‘s Luis Hernandez about the story.

“It just so happened that I was calling to make a reservation for this drag show brunch that this restaurant does in Wynwood every Sunday,” she explains, and on this occasion, she was having one of her “days with Zaya.”

Union says, “When I called to make the reservation, they were like, ‘This is kind of wild, you know, would you ever be interested in joining us for Pride?'”

The restaurant employee explained, “We have a float every year, and this year’s theme is ‘Bring It On,” referring to the 2000 cheerleader film that Union starred in, “And here you are calling. So we’ve got to ask.”

When Union asked her, Zaya replied, “Oh my God, I always wanted to go to Pride.”

“I was like, ‘What? You’ve never said that’ ,”Union recalled. “I said, ‘I’ve been to Prides all over the world. I’m good in these Pride streets, hold on!”

Union decided that if they were going to bring her to Pride for the first time, they need to have “our village — Zaya’s village.”

Several of Zaya’s friends, family, and school community came to join Zaya for her first time with “her people,” as Union referred to it.

She specifically said to Martinez, “Watching Zaya on that float, watching her in her community, come alive, it was like she was being birthed on that float.”

When they had first attended the Pride parade, Union and the rest of the Wade family received a mountain of backlash from anti-LGBTQ people that were upset to see Zaya’s family affirming her identity. Her father had only confirmed her coming out publicly earlier that year.

Union further told WLRN, “What it did was reveal how much we didn’t know and how much we needed to unlearn. How invested we all seem to be in the patriarchy, and we all had to learn how to sort of divest from some of those older ways of thinking that had just been completely toxic and problematic and not accurate.”

Since then, Zaya even has former First Lady Michelle Obama talking about how proud of her they are.

Union’s book You Got Anything Stronger? came out September 14.