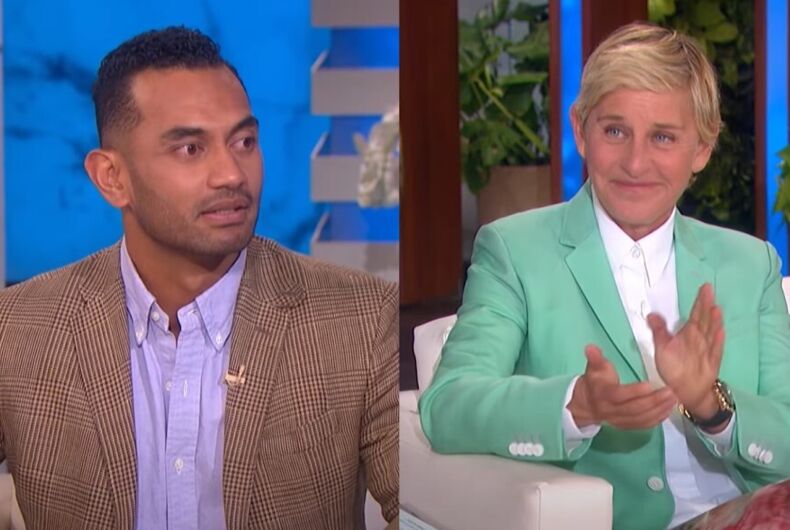 Inoke Tonga, a volleyball coach fired from Valor Christian High School in Colorado, told Ellen about how the school administration told him to convert to being straight and “denounce being gay” or lose his job.

Tonga, who is gay and Christian, said that he was called into a meeting with school administrators last month, thinking that he was up for a promotion. But then it became apparent what the meeting was about.

Related: Furloughed gay teacher fired during pandemic after being outed to his employer

“Did you ever post anything about identifying as a gay man or advocating for the LGBT community?” one of the administrators asked. He had posted about being gay and Christian on Facebook earlier, he told Ellen.

Tonga said he was “happy to say yes” because he wanted to stand up for gay people, but that didn’t make the administrators happy.

“Well how do you think that reflects on the school?” one of the administrators asked him. “You’re a danger to put in front of the kids.”

Tonga said that the meeting went on for about an hour and a half and that he felt ashamed since he didn’t advocate for himself because he was surprised about the turn the meeting took.

As he was leaving, one of the administrators offered him some “kind of conversion books” and said, “When you are ready to accept our help- we’re not holding this coaching position over your head, but when you’re ready to denounce being gay and accept our help to become a child of God, then you can have your position back.”

Tonga refused and, the next day, the administration emailed the volleyball players and their parents and said that he “chose to leave” because he’s “struggling with a spiritual battle.”

But he said that the only spiritual battle that happened is with the religious homophobia he experienced growing up. He talked about fighting the shame he felt as a teen and how he was taught that being gay was the result of “letting temptation into your mind.”

Tonga also said that he remembered how proud he was when he came out at 26-years-old, so he couldn’t back down.

He said that he still loves the kids he coached and “entered the lions’ den” to attend the girls team’s opening game several weeks after being fired.