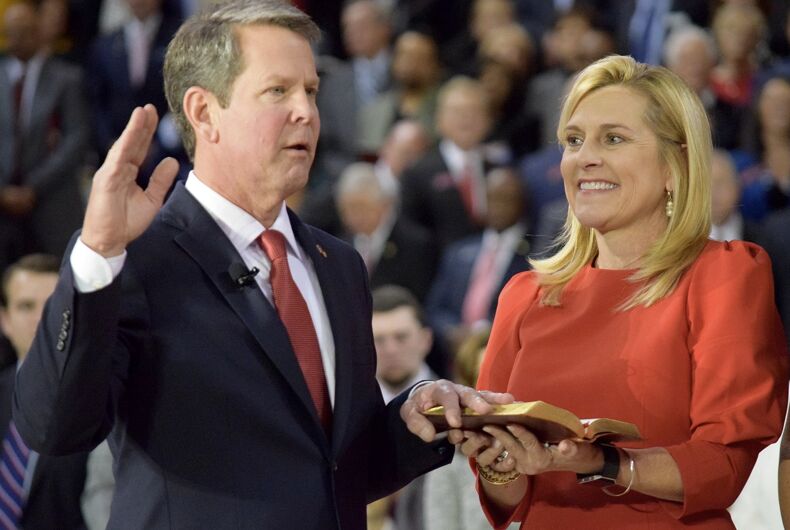 Brian Kemp being sworn in as governor with his wife Marty.Photo: Georgia National Guard

Georgia Gov. Brian Kemp (R) is defending his opposition to the COVID-19 vaccine and mask mandates by telling the story of an “AIDS vaccine” that does not exist.

While Kemp says that he supports people getting vaccinated against coronavirus, he has called President Joe Biden’s vaccine mandate for federal workers “unlawful overreach.” He said earlier this week that he’s looking into legal action against the Biden administration for violating “personal liberties” with the vaccine mandate, which allows private sector workers to get tested instead of getting vaccinated.

But Kemp’s explanation of why he supports vaccines but opposes vaccine mandates is leaving people scratching their heads.

“We should focus on being civil and educating people about the vaccine and not trying to bully them into taking it and work at it that way,” Kemp said during a recent appearance on a rightwing podcast.

“I mean that’s basically how the AIDS vaccine worked, you know, people wouldn’t take it early on because it was mandated, they started educating people and now it’s doing a lot of good out there,” he claimed.

There is no AIDS vaccine, nor is there a vaccine for HIV, the virus that causes AIDS. So there has never been a government mandate for anyone to get that vaccine, and there were never people who “wouldn’t take it early on because it was mandated.”

This isn’t the first time Kemp has brought up the harrowing history of failed AIDS vaccine mandates. In an August press conference, he said that he opposes mask mandates in the state because of the AIDS vaccine’s failures.

“Well we are not going to have a statewide mask mandate,” he said at the time. “[Commissioner of the Georgia Department of Public Health Dr. Kathleen] Tumi and I believe that they do not work. They did not work with the AIDS vaccine and they’re not going to work with the corona vaccine.”

Kemp not only refuses to implement a mask mandate in his state as hospitalization rates soar in his state – he is considering deploying the Georgia National Guard to help hospitals treat patients as staff is overwhelmed – he issued an executive order banning local governments in the state from passing mask mandates last month.

Newsweek asked the governor’s office for clarification, and a spokesperson for Kemp said that he was referring to the HPV vaccine, which was approved by the FDA in 2006.

In the first few years following its availability in the U.S., only Virginia and D.C. passed HPV vaccine mandates. A Johns Hopkins University study on HPV vaccine hesitancy found that the main reasons parents cited for why they weren’t getting their children vaccinated were concerns about safety, a “lack of necessity,” and an assumption that their children weren’t sexually active, since HPV is a sexually transmitted infection. “Anger about mandates” was not found to be a major reason for HPV vaccine hesitancy.

Only 53% of Georgians have gotten at least one dose of a COVID-19 vaccine, lower than most states’ populations, including Florida’s.

Kemp, who is up for reelection next year, might be trying to appease vaccine-hesitant voters in order to remain in office.

He won his 2018 election by a razer-thin margin after purging voters from registries without notifying them in his role as Georgia Secretary of State. Hundreds of thousands of people removed from voter rolls still lived at the same address they registered under, according to one analysis, which was several times larger than the number of votes he won the 2018 election by.

Congress opened an investigation into his actions for voter suppression.