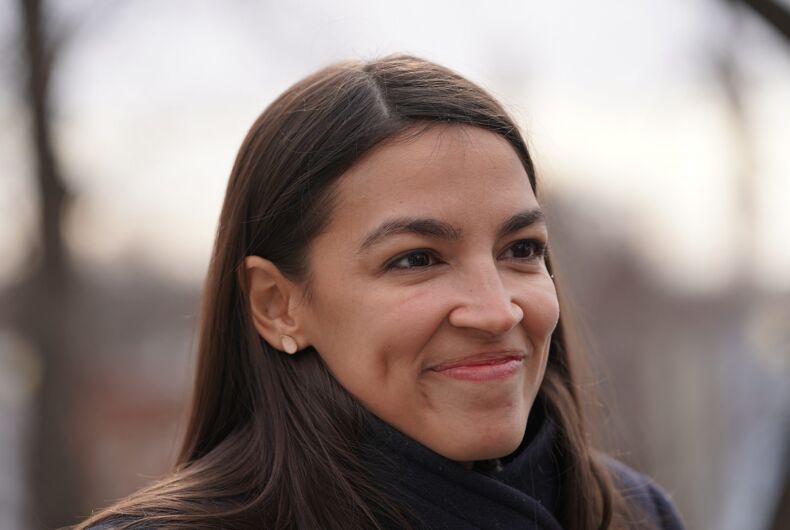 Rep. Alexandria Ocasio-Cortez (D-NY) clapped back at a rightwing publication that made fun of her for recognizing that trans men and non-binary people can get pregnant.

Ocasio-Cortez was on Anderson Cooper’s CNN show earlier this week where she schooled Texas Gov. Greg Abbott (R) on “disgusting” comments he made about pregnancy and rape while defending Texas’s S.B. 8, the law that puts a $10,000 bounty on anyone who aids in the procurement of an abortion after the sixth week of pregnancy.

She responded to his defense of S.B. 8 where he said that the law doesn’t prevent rape victims from getting abortions since they have six weeks to do so, saying Abbott is “not familiar with a woman- with a female or a menstruating person’s body, because if he did, he would know that you don’t have six weeks.”

Throughout the segment, Ocasio-Cortez was careful to use gender-inclusive language to refer to people who get pregnant, which the Daily Mail decided to mock her for. In an article on what they called “AOC’s bizarre insult to 40-years-married Greg Abbott” – implying that Abbott knows more about how menstruation works than Ocasio-Cortez does because he has been married to a woman for 40 years – they said that she doesn’t know what she’s talking about because she didn’t limit her comments on pregnancy and menstruation to women.

In the article, the Daily Mail says, “AOC calls women ‘menstruating people’ while explaining the female body.” And Ocasio-Cortez wasn’t having it.

“Not just women!” she tweeted. “Trans men & non-binary people can also menstruate. Some women don’t menstruate for many reasons, including surviving cancer that required a hysterectomy.”

“GOP mad at this are protecting the patriarchal idea that women are most valuable as uterus holders.”

She also called on people to remember that “trans, two-spirit, and non-binary people have always existed and will always exist,” ending her second tweet with rainbow flag and trans flag emoji.

People can stay mad about that if they want, or they can grow up ✌🏽🏳️‍🌈 🏳️‍⚧️

In a later tweet, Ocasio-Cortez called out Abbott’s promise to arrest all rapists so that rape survivors would no longer need abortions.

“If Gov. Abbott is as ‘anti-rape’ as he claims, why doesn’t he just lead the Texas state leg[islature] to pass a law for $10k bounties on people who engage in or aid sexual assault?” she asked.

“Or is he opposed to that bc it’s a slippery slope of vigilantism where men could be unjustly targeted?”

If @GovAbbott is as “anti-rape” as he claims, why doesn’t he just lead the Texas state leg to pass a law for $10k bounties on people who engage in or aid sexual assault?

Or is he opposed to that bc it’s a slippery slope of vigilantism where men could be unjustly targeted? 🤔

Howard Stern just said what everyone is thinking about unvaccinated people