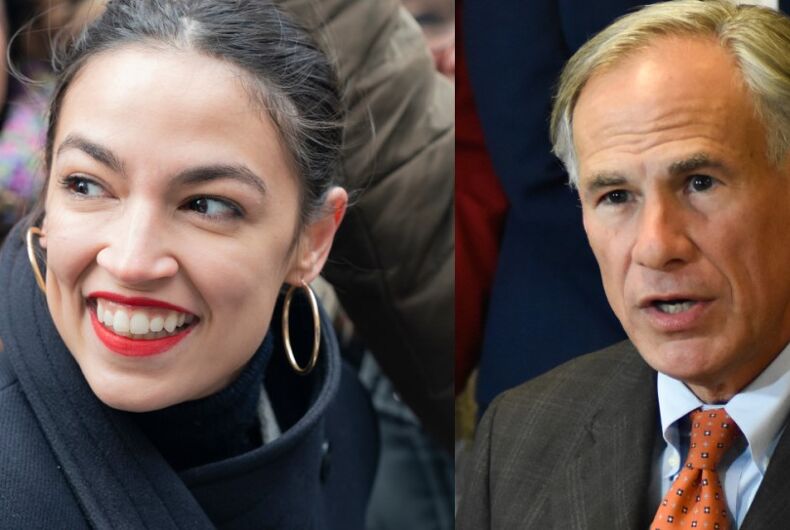 “I’m sorry we have to break down biology 101 on national television, but in case no one has informed him before in his life, six weeks pregnant means two weeks late for your period,” she told CNN’s Anderson Cooper. She also noted that it’s not just cis women who can get pregnant, but also trans men and non-binary people.

Abbott has come under fire for signing Texas’s S.B. 8, which offers a $10,000 bounty to anyone who sues someone that helped in the procurement of an abortion after the sixth week of pregnancy, which can include everyone from health care workers to taxi drivers. The vast majority of abortions occur after the sixth week of pregnancy, in part because many people don’t know that they’re pregnant that early.

The conservative Supreme Court let the law go into effect this month as it gets challenged in court for violating Roe v. Wade.

“Why force a rape or incest victim to carry a pregnancy to term?” a reporter asked Abbott yesterday.

Abbott insisted that S.B. 8 “doesn’t require that at all. Obviously, it provides at least six weeks for a person to be able to get an abortion.”

“Let’s make something very clear,” Abbott said, “rape is a crime. And Texas will work tirelessly to make sure that we eliminate all rapists from the streets by aggressively going out and arresting them and prosecuting them and getting them off the streets.”

Ocasio-Cortez was less than impressed with Abbott’s understanding of pregnancy: “He’s not familiar with a woman- with a female or a menstruating person’s body, because if he did, he would know that you don’t have six weeks.”

She explained that pregnancy is measured from the beginning of a person’s last period, which means that if someone has a regularly monthly cycle, the “sixth week” of pregnancy is two weeks after the first missed period.

“And two weeks late on your period for any person, any person with a menstrual cycle, can happen if you’re stressed, if your diet changes, or for really no reason at all. So you don’t have six weeks,” she said.

She also called out Abbott’s suggestion that Texas will start prosecuting rapists and that will end all rape.

“The majority of people that are raped and assaulted are assaulted by someone that they know,” Ocasio-Cortez said. “These aren’t just predators that are walking around the streets at night. They are people’s uncles. They are teachers. They are family friends and when something like that happens it takes a very long time, first of all, for any victim to come forward.”

She also said that it’s hard to trust a state lawmaker who wants to force people to carry pregnancies to term to actually prosecute rape as thoroughly as Abbott said would happen.

“The same type of rape culture and the same type of misogynistic culture that informed this abortion law to begin with is also- you know, those beliefs are held by the governor himself and the Texas state legislature. Frankly, there are many people in power, as we know from the MeToo movement, that commit sexual assault, that help their friends cover up these crimes. And some of them even serve in the same state legislatures that are voting on these anti-choice bills.”

“He speaks from such a place of deep ignorance,” she concluded.