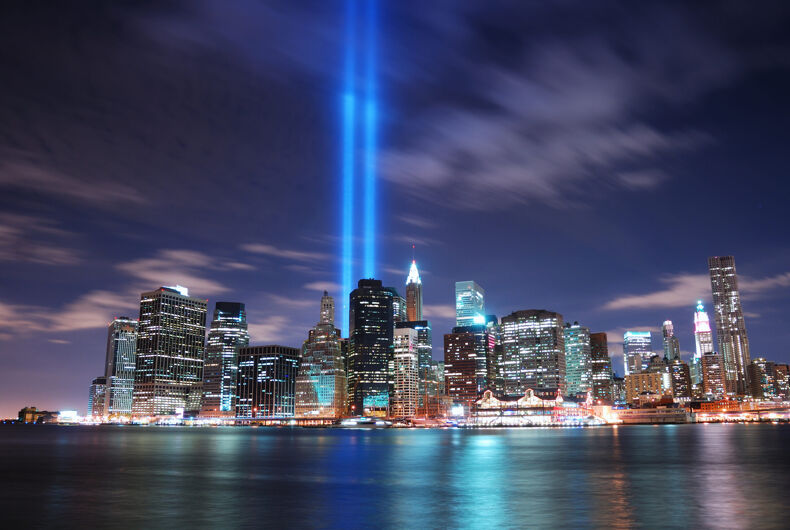 Today — on September 11, 2021 — the New Ways Ministry has officially made a call for Father Mychal Judge to be canonized as a Saint in the Catholic Church.

It’s not happenstance that the Ministry made the call today, of all days. Father Judge was one of the lives lost in the World Trade Center’s Twin Towers on September 11, 2001. As chaplain of the Fire Department of New York, spent his last moments in the midst of a terrorist attack administering last rites, praying over his fellow victims by saying, “God, please end this.”

Related: On a queer day: 9/11, LGBTQ people, & a nation’s unfulfilled promise of unity

Judge later became the subject of a 2006 documentary Saint of 9/11, and the world learned what many in Judge’s life knew, that he — like many of the 2,977 lives lost in the immediate attack and the thousands of lives sacrificed after from “9/11-related” illnesses and the War on Terror since — was a LGBTQ community member.

“The time has come for the Catholic Church to officially recognize him as a saint by canonizing him,” New Ways Ministry’s Francis DeBernardo writes in the LGBTQ Catholic group’s call for support in their efforts to canonize Father Judge. DeBernardo is also the author of the upcoming biography Mychal Judge: Take Me Where You Want Me to Go.

Citing “parish and campus work, his [Alcoholics Anonymous] participation, his outreach to homeless people and those with HIV/AIDS,” DeBernardo writes that “Fr. Judge was about so many things other than his gay identity and his ministry to LGBTQ people,” although the fight for his sainthood has stalled since efforts largely began in 2017.

Amanda Mark said similarly about her friend, Mark Bingham, considered one of the leaders of the 33 passengers and seven crewmembers aboard United Flight 93 who fought back against the hijackers and successfully prevented it from killing countless others.

“At first I really felt like his being gay didn’t matter. Don’t put out ‘gay hero’ — he was just a hero,” she said to NBC News, but she and Bingham’s other friends conferred and “we decided at that time we should encourage that perspective because the truth was there weren’t any gay heroes.”

Bingham’s life is memorialized in one of many ways through the Bingham Cup, a bi-annual LGBTQ rugby tournament.

Bingham and Judge are just two of several LGBTQ people who lost their lives 20 years ago, many of whom are being remembered across the country today as part of annual memorials at the site memorializing the attacks in New York City; Arlington, Virginia; Shanksville, Pennsylvania; and elsewhere around the world.

In a statement, Brian Bond, the executive director of PFLAG, commemorated both Bingham and Judge.

“The terrorist attacks on 9-11 upended the world as we then knew it. Yet, the story did not end there. Valiant firefighters, paramedics, and police rushed to the front lines to help, including Rev. Mychal Judge,” Bond said, “and passengers like Mark Bingham, who were trapped on a suicide mission to harm, fought back and in doing so saved the lives of countless others. These are just two of the patriotic heroes of that day who were LGBTQ+, and also only two of the victims who lost their lives in the terrible tragedy of 9-11.

For many other LGBTQ people, such as Pamela Boyce, David Charlebois, Eugene Clark, Joe Ferguson, Carol Flyzik, Daniel Brandhorst and Ronald Gamboa, Tom Hay, Sheila Hein, Wesley Mercer, and Cathy Smith, their stories have been publicly shared over the years.

The stories of countless others who lost their lives as a result of the attacks — such as Michael Hance, a police officer and first responder that day that lost his life due to 9/11-related cancer — are coming out more and more with each passing year.

Still, there are many stories that have not been — and may never get — fully told.

The global acceptance of LGBTQ people has changed drastically since 2001, due in no small part to the LGBTQ people that sacrificed their lives and the same-sex partners of many who had to fight for rights or recognition following their losses.

As America has pledged since that dark day two decades ago, those of us still here today will never forget.

As First Lady Jill Biden said in an official statement, “It can be difficult to untangle meaning from loss and tragedy, when nothing seems clear and we just want one more minute of the ‘before’ again.

“Yet, as we remember those we lost because of the September 11th attacks, and contemplate our changed world since, may we honor their lives and legacies by reaching out for each other again in unity, recognizing that our similarities are infinite and our differences precious.”

President Joe Biden is not scheduled to speak publicly today, but he is visiting all three sites marking where attacks happened 20 years ago today. Last night, the White House released a six-minute video remembering the lives lost and what has changed in America since.

“Unity is what makes us who we are, America at its best. To me, that is the central lesson of September 11,” President Biden said in the video. “It’s that at our most vulnerable, in the push and pull of all that makes us human, in the battle for the soul of America, unity is our greatest strength.

“Unity doesn’t mean we have to believe the same thing — we must have a fundamental faith in each other.”

20 years after September 11, 2001, we commemorate the 2,977 lives we lost and honor those who risked and gave their lives. As we saw in the days that followed, unity is our greatest strength. It’s what makes us who we are — and we can’t forget that. pic.twitter.com/WysK8m3LAb

Out Transportation Secretary Pete Buttigieg said in his statement today, “Two decades ago, we lost thousands of lives to unthinkable terror. Today, we honor the memory of the victims as well as the heroes who ran toward the danger to save others. That courage should guide us as we work to keep our country safe and strong, now and in the future.”

Millions of others continue to commemorate the anniversary of the deadliest attacks to happen in America.

Two decades ago, we lost thousands of lives to unthinkable terror.

Today, we honor the memory of the victims as well as the heroes who ran toward the danger to save others.

That courage should guide us as we work to keep our country safe and strong, now and in the future.

Today we remember the lives we lost on 9/11.

Twenty years later, words are no more capable of making sense of the loss. If we want #NeverForget to mean something, we have to keep making it so.

May we share our stories today. Be kind to each other. Live by example. pic.twitter.com/R1JlcXnNeX

September 11th, 2001 was one of the darkest days in our nation’s history, and on the 20th anniversary of this tragic attack on America, we remember the innocent lives who were taken from their loved ones. pic.twitter.com/7bNS0KVxxj

This morning 20 years ago, two flights took off from Boston Logan, never to return. Today we remember the 2,977 lives lost—206 Massachusetts residents—in the September 11 attacks. It is special to be with their families today to grieve and honor their memories. pic.twitter.com/yKgu0kAHde

“If we learn nothing else from this tragedy, we learn that life is short and there is no time for hate.”

Today we remember the 20th anniversary of the tragic events of 9/11, a day that senselessly took the lives of 2,997 Americans and shook our country to its core and say, “never again.”

Today we honor the nearly 3,000 men, women, and children who died on September 11, 2001, and the heroes who have always run towards danger to do what’s right. Let’s never forget that day, and let’s never take them for granted. pic.twitter.com/VkN11wZAMh