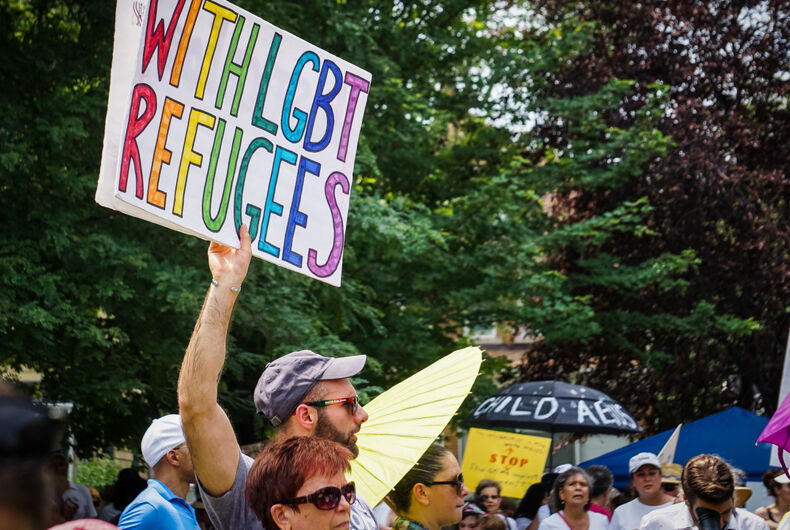 June 30 2018 - A man in Detroit holds a protest sign above the crowd that says "With LGBT Refugees."Photo: Shutterstock

Several human rights organizations are calling on the Biden administration to do more to help LGBTQ people in Afghanistan seek asylum in the U.S. as the violently anti-LGBTQ Taliban takes over the country.

The organizations – including HRC, Immigration Equality, Rainbow Railroad, the Council for Global Equality, the International Refugee Assistance Project (IRAP), and the Organization for Refuge, Asylum & Migration (ORAM) – asked the administration to adopt their 10-point plan to help relocate queer and transgender Afghan people to the U.S.

Related: Taliban promises to brutally execute gays if it regains power in Afghanistan

“Same-sex activity was already criminalized before the Taliban took control, but the new regime’s mandate to rule with Sharia law makes the fate of LGBTQI Afghans even more precarious, subjecting them to the very real possibility of a death sentence,” the letter states. “There are already alarming reports from LGBTQI Afghans about their fear of living under Taliban rule, with many saying that they have gone into hiding in fear for their lives.”

The letter cites a Taliban judge who said: “For homosexuals, there can be two punishments: either stoning, or he must stand behind a wall that will fall down on him.”

An LA Blade report from earlier this week said that Afghanistan has already changed for the worse for LGBTQ people.

“I’m 100 percent sure that my life is not safe anymore… they will definitely kill me. Being gay is not a good thing in Afghanistan…. Everything has totally changed. Nobody is happy here.”

The steps the letter-writers are asking the Biden administration to adopt include prioritizing the evacuation of vulnerable refugee populations like LGBTQ people, giving priority access to the U.S. refugee program for LGBTQ people fleeing Afghanistan, keeping lists of LGBTQ people trying to leave the country confidential, lifting the cap on the number of refugees the U.S. is willing to accept, and providing funding for temporary housing in other countries while they are waiting for processing.

“The international community must act in concert to protect vulnerable populations now placed at risk,” the letter concludes. “We urge the United States to increase and prioritize its immediate, medium-term, and long-term efforts on behalf of the LGBTQI community in Afghanistan.”

Suicide is preventable. Learn how you can help yourself or others on World Suicide Prevention Day